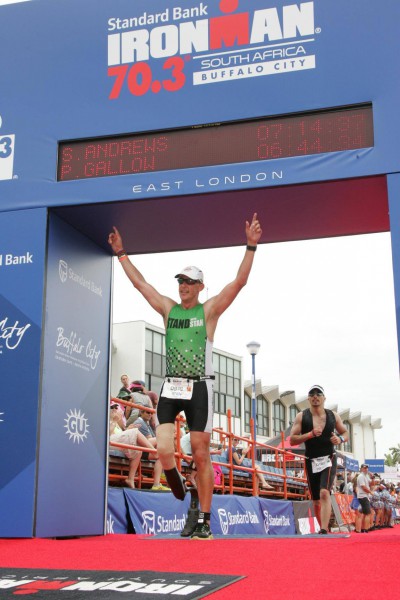 Para-triathlete Stan Andrews tells his inspiring story, from growing up with a deformity to aspiring to get to the 2016 Paralympics. – BY SEAN FALCONER

Born with a deformed right foot and under-developed leg, Stan says that he faced challenges from day one, but his family raised him to believe that he was no different to other kids. “Obviously, my childhood involved a fair amount of bullying and exclusion, because as kids, not everyone wants to be friends with the kid who has a 'stupid leg,’ but that allowed me to develop a great amount of resilience, which has always played a beneficial role in my life.”

At age seven, the doctors recommended that his foot be amputated, as they were worried that it may limit him later in life, and he says it was a life-changer. “The best decision ever, as far as I am concerned.” Fast-forward to 2011 and Stan says after another failed relationship, he decided one afternoon that he needed to do something for himself. “I needed direction, so I decided that I would set myself three goals, a small one (swim the Midmar Mile), medium one (complete the 94.7 cycle race) and an impossible one (summit Mount Kilimanjaro).”

“As fate would have it, I was lucky enough to win a competition which gave me the funding to climb that mountain, and 21 September 2012 saw me standing on top of the world's highest freestanding mountain. I had done it! Naturally, once back, the pressure was on to now achieve the next goal, so on a borrowed mountain bike, with little over a month of training, the 15th of November saw me finish the cycle race after 4 hours 45 minutes of pure torture. The following February I had no option but to throw myself into the Midmar Dam and complete that swim. This all made me believe that the world really was now my oyster and that I was unstoppable!”

New Challenge, Please
That got Stan looking for his next challenge, and after meeting American para-triathlete Levi Kane early in 2013, who suggested he take on a triathlon, he did some research and decided that he wanted to be an Ironman! In November that year, Stan participated in his first triathlon, the 5150 African Champs. “Wow, I managed to complete it in a time of 3:42, and I had achieved another milestone. Then, packing up after the race, Kevin Garwoood, who is well known in the triathlon scene, approached me and suggested that instead of chasing the Ironman dream, I should rather see if I could perhaps make my way to the Paralympics in Rio 2016, where triathlon will make its debut. Honestly, I thought he was crazy, but I decided to research it anyway.”

A month later Stan qualified for the Provincial Championships, then went on to win his PT4 para-category at the National Championships in East London. “Unfortunately, due to a lack of events, I was unable to qualify to go to the Grand Final that year, but 2014 and 2015 have seen me improve even more, and I have been able to represent South Africa on several occasions. The highlight of the year so far was winning the African Continental Championships in Egypt in May. I have also taken part in various other international events, the most recent being the Paralympic test event held in Rio de Janeiro.”

Look at Me Now!
Now, with selection for the Paralympics looking good, Stan says he is really pleased with how far he’s come in a short time. “Just to put things in perspective, when I was training for the Kilimanjaro expedition, my 5km run time was 37 minutes, with some walking. My current 5km PB, after a 750m swim and 20km cycle, is 21:15. I just love running! And I hope that my story will inspire people who may have the attitude that running is impossible for them. It does not matter how slow you run, at least you are moving forward – and you are still faster than any person on the couch!”