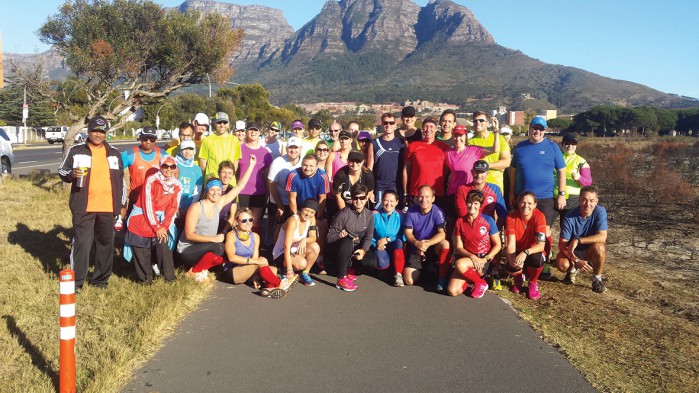 After 20 years of running, I can look back on some incredible memories of races I have run, places I have been and people that I have met, and still, what I experienced on 27 April touring the Cape Town area with a bunch of running friends as part of the 6 Freedom Runs for Freedom Day Challenge stood out as one of the really special days of my running career!

In 2014 a group of Johannesburg-based runners decided to take on all the 5km parkrun routes in the city in a single day, and they called it doing Freedom Runs, as they ran them on 27 April, the Freedom Day public holiday. Down in the Cape, David Papenfus saw this mentioned online and decided it sounded like a great idea, so in March he called up all his Red Sock and parkrun mates in the Stellenbosch area and suggested a Cape version of the same challenge for 2015, on the six parkrun routes we currently have up and running in the Cape Town area, including Bellville and Stellenbosch. Soon a Facebook group had been created, the various parkruns contacted, and the group of Cape Freedom Runners began to grow, with runners from all over Cape Town saying they would join for one or more of the runs.

Early Start
So it was that the Stellies group met in the Spar parking lot before sunrise and off we went to Fish Hoek for the first run at 7:30am, with great excitement and jokes flying. It was a wee bit cold and windy, but after a few words of welcome from Dave and a group photo, we soon warmed up on the run, and then it was straight back into the cars and over Ou Kaapse Weg to get to Rondebosch Common for Freedom Run number two at 9am. I ran these both fairly hard, to catch up to friends after hanging back at the start to tweet pics of the massive groups that met up to run with us, and I soon realised I was going to have to pace myself a wee bit more if I wanted to get through the next four… So, I took it much slower (and chatted a whole lot more) at the third run in Green Point (10:30am), and again at the Big Bay parkrun in Blouberg at 12, where a brisk south-easter also made the first half of the out-and-back route a bit more challenging.

I was blown away by how many people had heard about our Challenge via Facebook or running friends, and then come out to join us for anything from one to four of the runs, depending on what their schedules for the public holiday allowed. The spirit in the ever-growing group at each run was amazing, which really kept us all going as our legs started to stiffen up from all the stop-starting – but we were having so much fun, that was just a mild irritation, really.

Taking strain…
After a lunch stop in Blouberg, we headed to the hilly three-lap Bellville course for a 2:30pm start, and by now I wasn’t the only one showing signs of strain. Then it was back to Stellenbosch for the Root 44 parkrun, delayed from 4pm to 4:30pm, as we had taken a bit longer at Bellville than planned, and that saw 15 of us running our sixth 5km route for the day. That group included runners from Bellville, Cape Town and Fish Hoek joining our Stellies group, and by that stage we were all comrades in arms and cheering each other on. It was hugs and high-fives all-round as each of us finished our last run of the day.

That evening, over well-earned beers, we heard that 22 runners had done all nine parkruns in Joburg that day, and I still wonder how they managed to fit them all in – they must have raced the routes and then driven like bats out of hell! That said, by next April we’ll have a few more parkruns in the Cape, so we could be doing a nine-run challenge ourselves. It was a stunning experience with stunning people, so here’s a huge shout-out to my fellow Freedom Runners: David, Ilse, Adele, Peter, Mariska, Zahn, Cecil, Jacques, Marion, Anna, Colin, Craig, Kim and Gino. I’m looking forward to doing it again with all of you (and still more runners) next year!