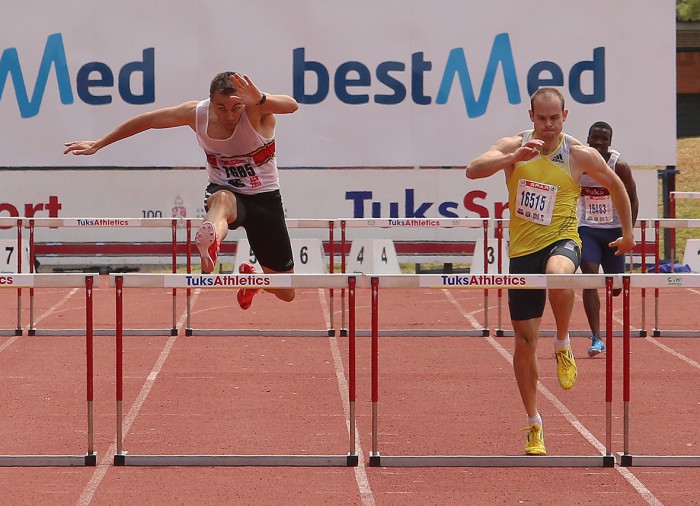 Having won medals at the African Champs, World Champs and Commonwealth Games, and having just added a seventh senior SA title to his list of honours 12 years after his first as a 17-year-old in 2003, star 400-metre hurdler LJ Van Zyl is not only raring to go for the World Champs in Beijing in August, he is also eyeing an Olympic medal in Rio in 2016.

With a new coaching team behind him and fatherhood on the near horizon, LJ van Zyl is running better than ever right now. Just before jetting off to Europe to begin his international campaign last month, the 29-year-old chatted to Modern Athlete about his revitalised form going into 2015, including that SA title in 49.29 seconds in Stellenbosch – his fourth qualifier for Beijing – as well as a new 200m dash PB of 20.71 (following shortly on another new PB of 20.86). He says his great form is largely thanks to working with his new coach Irma Reynecke at the High Performance Centre (HPC) in Pretoria.

“With Irma, it’s a lot of focus on speed work. You’re never slower than 85% in training, which is quite something! It took me about three months to get used to her programme, because I come from a more endurance background, but I’ve seen it work. My 200m flat-out time is faster and my confidence is growing,” says LJ. “Also, being set up at the HPC, from being one of their first athletes back in 2005, I have an organised base camp as well as all my medical covered. Without that help, it would be very difficult for an athlete.”

All Systems Go
Starting with the GreatCity Games in Manchester, LJ says his international campaign will be all about enjoying the ride and loving the sport again. “The City Games is a unique experience and great warm-up because the organisers build an arena in Albert Square in the heart of the city. I won my event there in 2013, so it’s a great way to start my season before the real tester at the Diamond League meeting in Doha on 15 May,” he said.

Doha remains a special venue for LJ, as he holds the Diamond League meeting record there with his 48.11 finish in 2011. It’s a platform where he will be hoping to sneak under 49 seconds again and build more momentum towards the World Champs. Another Diamond League meeting in New York later in June will also tell him where he stands with his training and what he can target in Beijing. “At the 2011 World Champs in Daegu, South Korea, I won a bronze medal, so I want to go to Beijing with a little bit more,” he said. “My planning has gone well and I took a little rest after the national champs, visiting my parents to recharge, but the season is on again and it’s all systems go.”

Eyes on Rio
The three-time African champ, Commonwealth gold medallist and South African record holder (47.66) is hoping that a solid 2015 will set him up nicely for Rio 2016, where he is dreaming of a podium spot. “I’ve really won every medal in the 400m hurdles that I can, except that Olympic one,” he said, as he recalls his fifth placing at the 2008 Games. “I want to leave Rio with something, so this season will hopefully set me up perfectly for that moment.”

And with wife and fellow runner Irvette set to give birth to their first child in September, LJ has a lot more than hard yards on the track to give him the inspiration for next year’s showdown. “I’m so excited and it’s definitely a reason to get up with more fire every morning! Maybe our kid will follow in our athletic footsteps and have that speed from Irvette and me. Either way, it’s a great time for us, so I’m positive about what’s around the corner.”