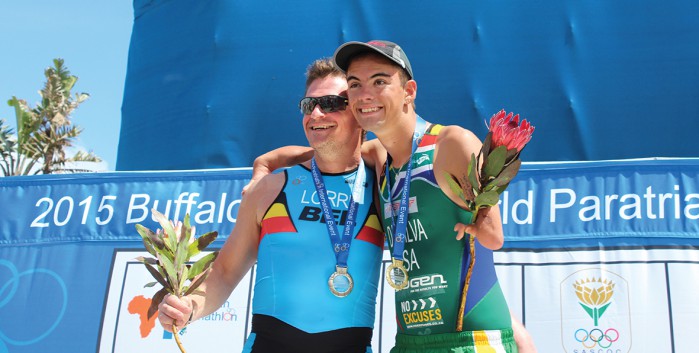 Para-athlete Dylan Da Silva was born with the physical disability Phocomelia, the malformation of his arms, but he has not let that hold him back from becoming a talented young athlete who is now ready to take the triathlon world by storm.

When Dylan was three years old and got his first bike, he immediately asked his father to take the training wheels off. “He refused, so I took them off myself and was riding on my own that very day. No-one taught me to ride a bike, or to drive a car, and I live like an ‘abled’ person,” says the 20-year-old from Johannesburg, who has always been an avid swimmer and cyclist, and then took to running as well when he challenged himself to do a triathlon in 2014.

His transition to triathlon was smooth after amazing performances in 2012 and 2013 as a para-cyclist in the C4 category, winning countless gold medals in time trials and with national records on the track under his belt. On the triathlon scene, he soon scored a Gauteng Champs win in the PT3 category, then added the SA title and the All Africa Champs title as well. “I was dependent on my swimming and cycling then, but a lot of people don’t realise that the running action requires a lot of work, so as I progress, I figure out what works,” he says.

Waves of Wins
In between the triathlon titles he also picked up the SA and Gauteng Championship para-cycling titles, but his multisport achievements had gotten him noticed and he was selected for the South African Para-triathlon team for last year’s ITU World Triathlon Grand Finale in Edmonton, Canada, where he finished 10th in his category. “Before the start, I sat by the water and looked either side of me and knew that it was a dream I wanted to work on,” says Dylan. Last year’s form as well as a win at the Buffalo City ATU Paratriathlon African Championships in the beginning of 2014 gave him the push to train harder.

His start to 2015 saw his performances get still better as he picked up a win at the Buffalo City ITU World Para-triathlon event in March. Then came what he considers his best performance as he won at the WTS Discovery World Triathlon in Cape Town in April, edging out fierce competitor and friend Stan Andrews, as well as blind para-triathlete Hein Wagner. “I work hard, training twice a day, because there is more competition and that just motivates me,” says Dylan.

Will For More
With the ever-present support of parents Melissa and Manny as well as long-time girlfriend Micaela, plus help from biokineticist Justin Jefferey and sponsor Biogen, Dylan reckons he is on the brink of still better results. He has been picked for the South African para-cycling team to participate at the World Cup in September, and he says he is hoping to find sponsors to help him continue to compete at the highest level. “Sport is my avenue as an ADHD child, and I know my family has gone through a lot, but I want to do well, get points for the World Tri Champs, and go get a podium there, and show the world that disability is nothing,” he says.

The Da Silva family would like to thank everyone who has supported Dylan in his nine years in sport, and ask that any potential new sponsors who would like to support him should please contact mel.kathdasilva@gmail.com