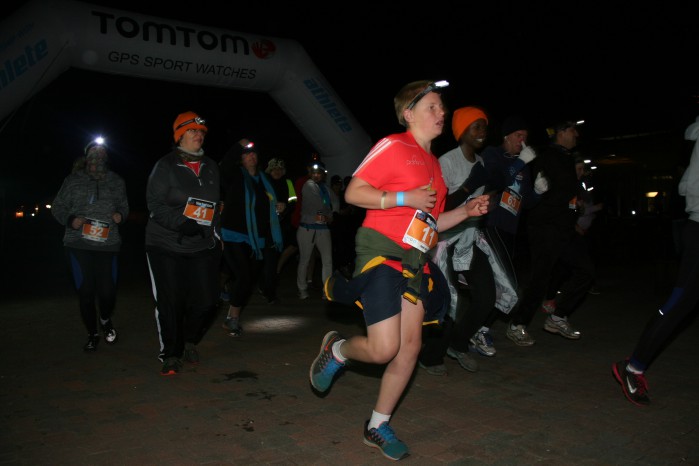 The inaugural Over The Moon Trail Run Series, hosted by Two The Core Events in association with Modern Athlete Magazine, was held on the evening of Wednesday 17 June in Johannesburg. Offering a technical 10km route for the more serious trail runners and a 5km shorter route for those looking to just enjoy themselves, the event was held at the RideFree Bike Park in Modderfontein Nature Reserve, and this was the first in the series of four events for 2015.

Entry to the race included sponsor giveaways, glow in the dark paraphernalia, as well as a free boerewors roll and first beer, while event frills such as music and fun for the whole family were also on the cards! Added to that, awesome prizes were up for grabs for the winners of each event, including weekends away at City Lodge, Subaru travel bags and a TimeX Ironman watch.

With the sun tucking behind the mountain, the temperature was only going one way… down! But in spite of the cold, just over 100 runners braved the temperatures and the dark to take part. A hush descended over the lake as Alistair “Allycat’ Cronk began the race briefing, followed by a bit of a warm-up for the runners conducted by Elsabe Venter, and then they were off for some fun on a brand new, never run before route at the RideFree Bike Park. The first 800m were flat or downhill, then the route climbed a long, gradual hill towards the top of the highest point, before descending through the bush on technical single track back to the finish.

The 5km race was won by Dudley Turner in a time of 24:52, and he was followed in by Jason Meredith (25:09). The women’s title was claimed by Debbie Ward in 26:45, with a lead of 1:15 over second-placed Nicola-Jayne Kirkby. The more challenging 10km race came down to a sprint finish as Bennie Roux and Raymond Orchison burst out of the bush and headed for the finish straight side by side! Bennie’s legs proved to have the edge over Raymond’s as he claimed a narrow four-second victory in a time of 38:31. For more results visit www.twothecoreevents.co.za.

Here’s what a few runners had to say about the route:
Ashleigh: “The route was challenging and involved a lot of single track, but all round was very enjoyable.”
Lauren: “The route was very flat for the first part, which was great because we could get into a rhythm before it got sandy and rocky! It was my first night trail run, so it was disorientating with the lamp – you never know where to step, but the runners warn each other about puddles or descents in the trail. Then there were some hills and single track for the next few kays!”
Carina: “I found the route hard but had fun doing my first night trail run.”

The vibe around the event was described as amazing, especially in the freezing cold conditions, and the many fire pits proved a most popular feature before and after the race as the runners looked for some warmth. (And a few shots of Sherry lent a helping hand, too!)

The next Over The Moon Trail Run takes place on Wednesday 15 July, again at the RideFree Bike Park in Modderfontein Nature Reserve, starting at 7pm. Bring your friends and family, grab a beer and a boerie roll, and enjoy the vibe at this fun event. R110 gets you a 5km entry and R130 gets you a 10km entry. Visit www.twothecoreevents.co.za to enter – closing Tuesday 14 July at 12pm.