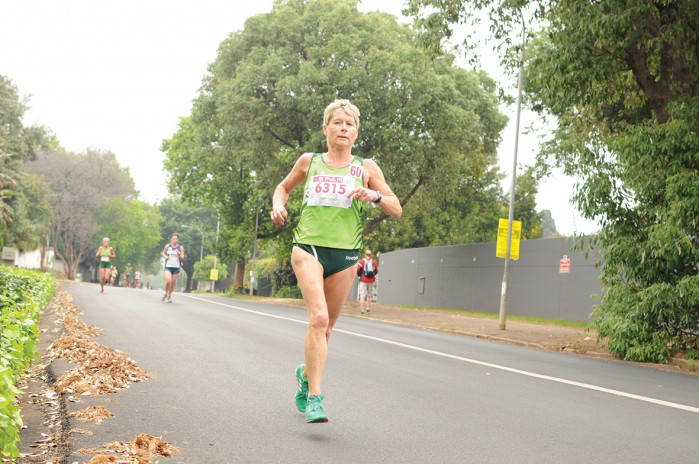 In the last two years, two female grandmasters have been rewriting the running record books on a regular basis in SA, so we caught up with both Nancy Will and Margie Saunders to find out what motivates them to chase down these records.

Where there’s a Will…

At this year’s Old Mutual Two Oceans Ultra-marathon 56km, Nancy Will (62), who runs for Pinelands in Cape Town, cruised her way to a new 60-69 age-category world best of 4:12:54 at the 50km marker, but just missed out on the grandmaster course record at the finish with her time of 4:44:48. “I missed out on the record by only 21 seconds! I was not aware of the record on the day and only read about what I had done a day after the race,” she said. “All it tells me is that I have to go back and get that record, because I can cut it down.”

Nancy now has 14 ultra medals (4:08 PB) and six half marathon medals (1:30:40 PB) at Oceans as well as five Comrades Marathon finishes to her name, including two Comrades silvers and a PB of 7:12:34, so it’s strange to think that she never really considered herself much of a runner in her younger years. “I was a swimmer, and it was only after I got married that I turned to running to lose weight, and it just stuck from there,” she says. “Today, there are so many experiences that stick out, from SA Champs to running for Western Province, to all the big races. I’ll also be heading back to Comrades again this year after 10 years away from the race. My son will be running and I am hoping to do well in my age group there.”

Competitive Streak
Having represented South Africa as a swimmer and recorded great results as a road runner, including setting Western Province records at various distances in her age category in the last two years, Nancy has also turned to trail running this year for something a little different. “I ran the 50+ Trail Summit Series and I am enjoying the challenge of trail. There is no boredom factor and it tests me.” Apart from Comrades and trail races, Nancy is also aiming to re-break her provincial records this year across various distances as well as cut down her times on her 42km, 21km and 10km finishes.

Just before her taper period before Comrades, Nancy was clocking around 100 to 120km a week, which was quite an intense load to make sure she can last on race day. “I usually train on my own, but I also join our club group twice a week. The atmosphere and support at the club is always great and there is such a hype around Comrades, too,” she says. “I’m glad I’ve got a sport that’s easy to do, where you can get fit and meet new people, because there are no barriers in this sport. I think the most important things running has given me are good friends and a healthy body!”

Port Elizabeth’s Margie Saunders (62) has made quite a name for herself in the last year as she has set and reset a number of SA records in the grandmaster category. At the end of February, she broke her own national mark for the 15km (1:04:01) to go with her national marathon (3:15:48) and half marathon (1:30:53) records. Now, having been in great form for the last few months and with her confidence at a peak, she’s ready to chase down the one SA record that has eluded her thus far, Sonja Laxton’s 10km record.

Interestingly, she also only came into running later in life. “I only started running when I was 35 years old, having been a swimmer for years,” she says. “Running came about because I wanted to do triathlons and I jumped right in and started with a half marathon, and suddenly found myself in the provincial team.” She continued setting fast times in her 40s, including a 2:55 marathon and two silver Comrades medals, which she considers her biggest running achievements, but then a speedbump in her health struck in 2000.

“I was diagnosed with breast cancer and for six months I underwent chemotherapy and radiotherapy,” she explains. “At 50 I was back running competitively again, but nothing serious and I was less competitive. Then at age 57, I took on my first Ironman 70.3 and at the 2013 World Triathlon Champs in London, I managed a first and fourth place in my age-group in the sprint and standard distances, and it was my mission after that to take running more seriously.”

Runner & Triathlete
Today, Margie wakes up at around 4am and says she never misses a day’s training, even if she has an early morning flight to Johannesburg for her work as a manager of medical schemes contracted with ER24. “I run every day, and still swim three times a week, but I keep my distances shorter in the week. The swimming is my secret in keeping up my cardio fitness. When I work at home in Port Elizabeth, I can sit at my desk at 5am, run at 8am and get back to work an hour later. Running is easy because you just head out with your shoes!”

Margie is now focused on working on her 10km time and is looking forward to competing in the full Ironman one day. “I retire next September at 63 years, so I can afford more time training for Ironman then, especially when you need time on the bike,” she says. “For now, I clock 40km a week, swim regularly and do some rides a few times a month. I’ve reached my best in my sixties and have got great support from my Nedbank club and my family.”