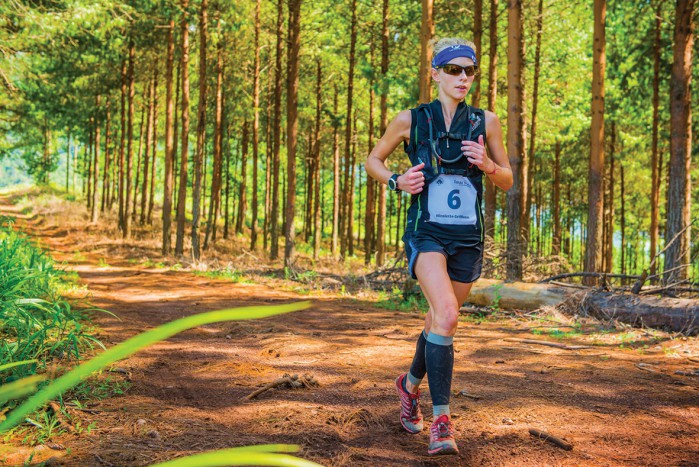 Nicolette Griffioen is ready to take on the world’s best next month when she jets off to France to represent South Africa at the IAU World Ultra Trail Champs on 30 May, but first she chats about her gift for tackling the technical.

In October last year, when she won the inaugural Cape Town Ultra Trail 100km, Nicolette effectively booked her place for the World Champs, but that didn’t stop her going on to chase down a second SA Ultra Trail Champs title at the end of January, at the Ultra Trail Mount Moodie in Mpumalanga. In fact, the 22-year-old finished fifth overall in 10:54:21, beating many of the men home! That guaranteed her ticket to France, alongside World Champs veterans Su Don-Wauchope, Chantel Nienaber and Tracy Zunckel. “Su was my main competitor in Mpumalanga and she passed me on a flat section, but at 50km she was walking, so I passed her and then worked hard to keep a distance,” says Nicolette.

Her national team selection also came just after an impressive win at the Totalsports XTERRA off-road triathlon in Buffelspoort a week earlier. Then in February, despite a disastrous swim, she still managed a fourth place at the XTERRA SA Champs in Grabouw in the Cape. Now, however, her focus has shifted back to trail running. “Going to the World Champs is an opportunity of a lifetime and I’m so excited! It’s a different ballgame and sometimes I feel I need to slow down on the ultras, because I’m still young, but I can never say no!”

It’s strange to think that Nicolette was not very active at school, apart from gracing the hockey fields. “I hated athletics! The real change was when I took a gap year after changing my course to veterinary science so I went to gym a lot, became a spinning instructor and did some running on the treadmill.” Then she entered her first race, a 10km trail run, and picked up third place. After that she was hooked and found her competitiveness driving her on.

“I was a 30km runner in the beginning and then moved up to 40km for my first Otter Trail Marathon at the age of 19. Then I got an entry into last year’s Cape Town Ultra Trail, and I didn’t actually train the bigger distances, so it’s amazing how it turned out. The last 20km were the longest of my life, though!” Now with two ultra trail events under her belt, Nicolette says she has realised she has the mental capacity to stick it out, especially once she gets past halfway: “After 50km, you know that you’re actually heading back towards the finish, so there’s no pulling out then, and I’m far too competitive to quit, anyway.” With six more years of studying at Onderstepoort to become a vet, Nicolette structures her days around morning and afternoon training sessions, with Saturdays reserved for long runs or bike rides, and Sundays her rest day. Living on a small holding near Lanseria provides a convenient base for training, where she often runs with her loyal dog of three years, Dobby, by her side. In fact, her afternoon training runs have become an obligation. “My dog has become obsessed with running. From four o’clock, she starts scratching on the door – there’s now a hole in the door from her enthusiasm – so it’s always a given that she’s out with me. Also, with my boyfriend Nathan also a keen runner and mountain biker, and my mom doing her first event at Buffelspoort, there will always be someone I can train with, and they always support me.”

Looking ahead to after the World Champs, Nicolette is hoping to take the win at the Otter in October. “I love getting over rocks, descending, going through rivers, tackling obstacles. I’m more cautious on my bike after some recent falls, but I have no fear when it comes to running the technical courses.” She is also looking to take part in the AfricanX, SkyRun and the Big 5 Challenge in Knysna, and adds that triathlon will also remain a focus. “I like the mix of triathlon, especially off-road, but my main goal is to travel to different continents to race.” So France is just the first stop…