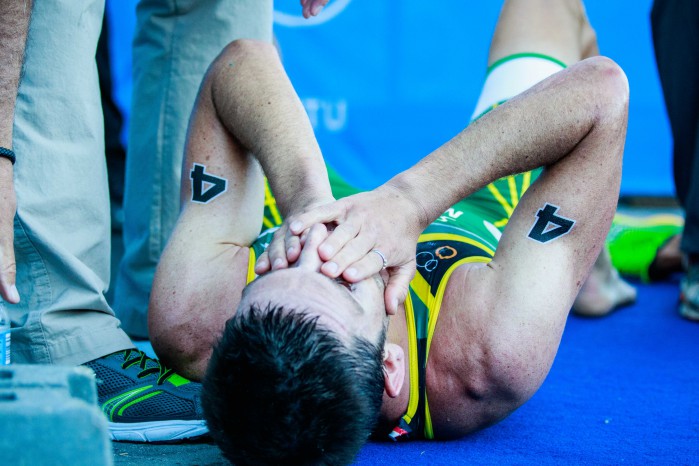 South African Richard Murray gave it his all in a bid to finish on the podium at Sunday’s Discovery World Triathlon Cape Town.

In the end Murray finished fourth after being passed by Vincent Luis in the final kilometer of the 10km run. Olympic champion Alistair Brownlee won in his first race back after injury and Spain’s Javier Gomez, the current World champion, finished second. It was Frenchman Vincent Luis who passed Murray in the final stretch. For Murray it was bitter sweet seeing that fourth place is one place better than last year, but the athlete from Durbanville desperately wanted to finish on the podium in front of his home crowd that was some 1000 strong in the Green Point Athletics Stadium.

“It was a spectacular race. I’m a bit upset that I couldn’t manage a place on the podium, but it is one place better than last year and I gave it my all. I was on the rivet during the running leg and I just couldn’t follow when Javier and Alistair went for it near the end. I tried to keep my third place. I still want to finish on the podium in front of my home crowd so badly,” said Murray.

“I am grateful for everybody who came out to support us today. I had kids running alongside me on the route screaming my name and that was very special. Big up to Javier, Alistair and Vincent for getting the podium places today. I‘m very happy to see all the people coming out to support us. The sport is growing and that is so important as well.”