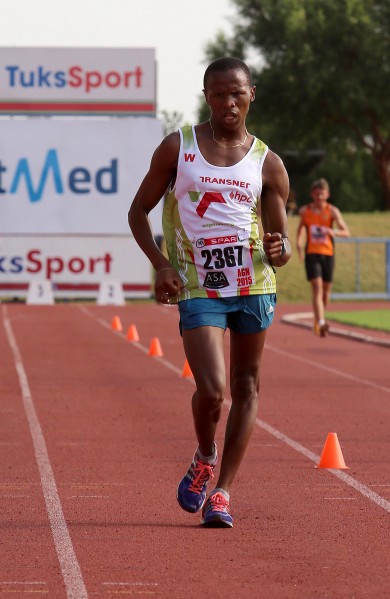 By breaking one of South Africa’s oldest athletic records at an Athletics Gauteng Meeting at Tuks on Saturday, Lebogang Shange proved that he is a man of his word.

As early as January the High Performance Centre (hpc) athlete confidently told anybody who was prepared to listen that he was going to break the South African records held by his coach, Chris Britz, and he reiterated on Friday afternoon that the 3000m record was going to be his.

“It is amazing that I was able to do what I had set out to achieve. This is hopefully the first of many records. I intend to go for the 5000m walk record next year.  The year after that I will try to break the record in the 10 000m, followed by the 20 000m record. The secret of being constantly successful is to try not to be too greedy. That is why I will focus on one goal at a time. I am planning to be a competitive walker for a long time to come. If my body holds up I will only retire at 42,” the 25-year-old said.

Shange will leave for Switzerland tomorrow where he will compete in the 20km walk on Sunday.

LJ van Zyl (Tuks and hpc) was the other athlete who had reason to smile on Saturday. He won the 400-hurdles in a time of 49.42s, which means that he has qualified for the World Championships in Beijing. Wouter le Roux was second in 49.87s.

“My winning time is not a true reflection of what I am capable of at the moment. I purposely did not run flat out.  If I did I would probably have run a time faster than 49s.  It was the first time this season that I competed in a 400-hurdles race and it was the confidence booster I needed.  It is my fastest season opener in four years for the 400-hurdles.”

Van Zyl will compete in the 400-hurdles again on 19 March in Sasolburg and he hopes to go faster than 49 seconds then.

“I am satisfied. I just wanted to get a feel for racing again and get the ‘rust’ out of my system before I start gunning for faster times.”