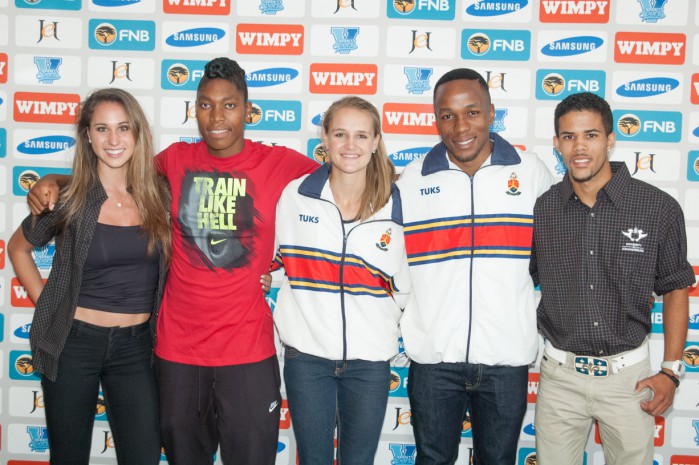 Varsity Athletics launched its third season in Johannesburg on Monday. It’s expected to be bigger and better than ever, with last year’s champions Tuks looking to make a strong start when the first meet takes place on 24 March in Potchefstroom. The second meet will take place on 20 April in Stellenbosch.

This year’s meetings will see a number of big names competing, including Olympic silver medallist Caster Semenya. The 24-year old will represent Pukke in the two meets.

Nine of the 19 South African athletes who participated in the Commonwealth Games in Scotland last year had taken part in Varsity Athletics earlier in 2014 – and of those nine, three won medals (two silvers and a bronze). “The fact that the athletes who took part in Varsity Athletics went on to not only compete but win medals at such a prestigious event is evidence that the quality of the competition is world class,” says Duitser Bosman, CEO of Varsity Sports.

Varsity Athletics exposes athletes to the level of competition, packed stands and noisy crowds they can expect to find wherever they travel in the world. “We believe that part of what makes Varsity Sports so great is that it exposes its participants to the kind of competitive intensity they can expect at big events,” says Bosman. “This helps them get used to the sometimes hostile atmosphere from the crowd so that they’re not overwhelmed when they have to perform under those circumstances for the first time.”

The age cut-off of 25 ensures that this platform serves as a catchment for youngsters who might otherwise fall away, while having the meets televised boosts the profile of some of South Africa’s most promising athletes.

“Without regular competition and incentive to compete, we run the risk of some of our best athletes slipping through the cracks,” Bosman points out. “By offering athletes the platform to showcase their skills and go up against other top competitors, we hope that we can keep them motivated. It’s our mission to provide a springboard for these incredibly talented athletes to launch their careers.”

Varsity Athletics meetings are conducted under the rules of IAAF and ASA, and athletes may take part in two events, excluding relays. Athletes earn points for their team according to where they’re placed. Nine points are awarded for first place, and seven for second place. Thereafter, the value of each place decreases by one point up to eight, which is worth a single point.

If there’s a tie for first place in any of the field events (except high jump), the athletes who are tied will get an additional trial. For the high jump, the standard IAAF jump-off rule applies. In the case of ties for any of the other places, the points are added up and divided by the number of athletes involved.