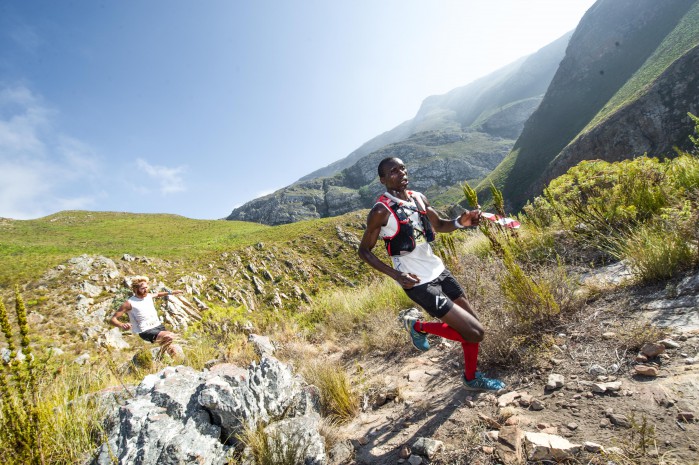 South Africa’s AJ Calitz and Bernard Rukadza of Zimbabwe, running as Team KWAY, claimed the second and third stage wins at the seventh annual ProNutro AfricanX Trailrun presented by New Balance in Grbaouw from 13 to 15 March, which gave them the overall win for the second year running.

They completed the three stages of 34km, 34km and 22km in a combined time of 6 hours 46 minutes 18 seconds, with Eric Ngubane and Thabang Madiba of Team Salomon second in 6:51:11, while Edwin Sesipi and Johardt Van Heerden of Team 32gi Gauteng finished third in 7:07:30.

In the mixed category, Yolande Maclean and Nic De Beer of Team CW-X Ultraspire claimed a hat-trick of stage wins to secure the title in an impressive combined time of 7:40:46. Kerry-Ann Marshall and Morne Van Greunen of Team Enduro Hub came in second in 7:51:44, while siblings Natia and Antoine Van Heerden of Team Twinning finished third in 8:20:39.

Although Nicolette Griffioen and Carla Van Huyssteen of Team ProNutro Timefreight shook things up in the women’s race by claiming the third stage victory, it didn’t make much difference to the overall order as Meg Mackenzie and Landie Greyling of Team Salomon Blondies eased their way to the women’s title in 8:06:26, having opened a huge lead over the first two days in spite of Landie waking up on day two with a sore throat. Nicolette and Carla finished second overall in 8:41:56, while Inge Visser and Liesbeth Van Der Merwe of Team Ganbei were third in 9:29:34.