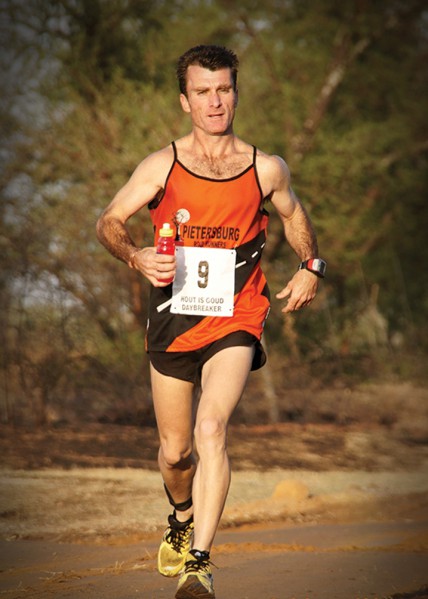 Multiple ultra-marathoning SA, African and event record holder Johan van der Merwe likes to go long. In fact, the longer the event, the better he gets, be it chasing records on the road or going round and round the track in pursuit of 60-year-old SA records set by the late, great Wally Hayward.

Ask multiple ultra-marathon record holder Johan van der Merwe what he thinks about running ultras, and he responds with an interesting cricketing analogy. “It’s like test cricket, really. Sometimes, things will be going smoothly and you could be going through a seamless partnership. Then, suddenly, things go from good to bad and your opponent grabs three or four quick wickets. It can change in a blink of an eye.” That said, this man obviously doesn’t hit many bad patches, judging by his impressive list of wins and records.

Johan only took up running in 1999, at age 27, due to being an overweight 87kg while working on the police force in Mokopane and joined Potties Athletics Club. “I had to get my health in check, and after starting to run, I lost 26kg in six months,” he says, adding that at first he just ran to lose weight, but then it became something he really looked forward to. “I was already onto my first Comrades run a year later in 2000,” and after coming home for an 8:38 Bill Rowan medal on debut, Johan realised that he had a natural talent for running ultras. By 2010 he had his Comrades Green Number 39957 and four silver medals to go with six Bill Rowans, but it was only in 2011 that he stepped up to his first 12-hour circuit race at the Dusk2Dawn and really found his niche. “I guess it was a tester,” he explains, “and I told myself if I did well, I’d up my training. If not, at least I tried.”

Well, he did do rather well – he broke the event record by 19km! And that win convinced Johan he could improve still more. “I guess from that point, one thing led to another. I was encouraged to do my first 100 Miler at Golden Reef and despite some niggles, I won it! But believe it or not, I was down in the dumps after that, needing to recover for a good three weeks. I knew I had to tackle another challenge, and that’s when the Washie dream was born…”

Johan says he knew the Washie course record was beatable. In fact, before his Washie debut, he was so confident about smashing the record that he posted about his planned record attempt on Facebook. That prompted a call soon after from a stranger who happened to know then record holder Manie Saayman way back when he set the course record of 13:13:38 in 1982, and the caller told Johan he’d never break what was considered an unapproachable record. “I was arrogant about it, I must admit,” says Johan. “I remember telling the stranger on the phone that I intended to better it and reminded him that he didn’t even know me! Before it all, I ran my Comrades PB in 6:24:35 so I knew I had it in me, and I got the Washie win that year in 13:07:05.”

After that, he managed to grab an equally impressive 13:18:02 in 2013, the all-time fourth-best Washie time, and this past year he clocked 13:21:49 for the fifth-fastest time. And it tested his endurance and willpower along the way, choosing the complete last year’s race without seconds beside him. He also put aside a foot niggle that he sustained during a 6-day race earlier that year. “I remember the constant headwind and me being alone,” says Johan, “it was a difficult one!” Johan also heaps praise for his online coach Nic de Beer who assisted in 2011 to get Johan to step it up before taking on anything more than the Comrades distance.

With the Washie record behind his name, Johan began looking for new challenges, and soon his eyes turned to Wally Hayward’s 24-hour SA record of 256.4km, set way back in November 1953 in England. No other South African had passed the 250km mark since then, and on his first attempt Johan just missed the record by 3.4km when he ran 253.076km in a race on his home track in Polokwane in April 2013. Putting that record aside temporarily, he then chased down the 48-hour SA and African records while competing in the EMU 6-day race in Hungary in May 2013. He completed 333.02km in just over 46 hours to beat the previous African best of 332km set by Namibian Johannes Gawaxamab in 2001, before leaving the track for scheduled rest in preparation for the next four days of running. Then on 7 December he went after Wally’s record again, this time in the Soochow International 24-Hour circuit race in Chinese Taipei, and coming home third overall, he finished on 258.064km to claim the SA record as well as beat the previous African record of 257.881km. (In the same race, he had also claimed the SA 200km track record in 17:34:20, taken as a split during the 24-hour race.) Even though he didn’t win that race, Johan rates it as one of his best performances, because he had achieved what he had set out to do, break Wally’s record! “Before trying it, it looked easy on paper. I needed to break that record, so when I achieved that, it was like a huge monkey off my back!” My wife went the extra proverbial mile during the last four hours. The eye contact was important. She also chased me out of the loo after I realised I had the record in the bag at 22 hours. My mind was playing tricks on me, ordering my body to go to the loo after every 400m. She ordered me to get back out there.”

Back home, Johan also continued to tick off the 100 Milers, and he currently holds the course records for the Coaldust Dreams and Capital Classic races to add to his Washie record, and he also celebrated circuit race records at the Dawn2Dusk 12-hour, Hout Is Goud Day Breaker 12-hour and Jannas 18-hour events. And somewhere in between this he still managed to run consecutive Comrades silvers from 2009 to 2014. “People keep thinking that doing Comrades must be easy for me, but it’s never easy keeping up your form on the day,” he explains. “That said, 2015 will probably be the first time I’ll take it easy and use Comrades just for training for Washie, where I’ll be looking to dip under 13 hours.”

So what preoccupies the mind of an athlete trudging along for 160km or circling a track for days on end. “You think of Washie and running through night-time and it’s hard to keep motivated, but I have this ability to hang in there! As for circuit races, I love going around and around, because there are no surprises, like a big hill after a corner, and you can measure yourself by taking lap times to ensure that your pacing is correct and that your goal is maintained,” says Johan, adding that his game plan is to approach each event aggressively and hang in there when the going gets tough – and it does get tough!

“My bonus is my mental state. My training buddy can beat me in a session, but when race day comes, beast mode kicks in. If you decide to break through that ‘wall,’ then your body can accomplish anything!” And with that attitude, it’s no surprise that Johan has the six-day world record pencilled in as a goal for the next few years, in between travelling the globe for more ultra events. “My golden rule is to believe in myself. It’s corny, but there is no such thing as a wall if you back yourself. Like cricket, a running event can swing either way, but once you get going, it’ll all work out.”