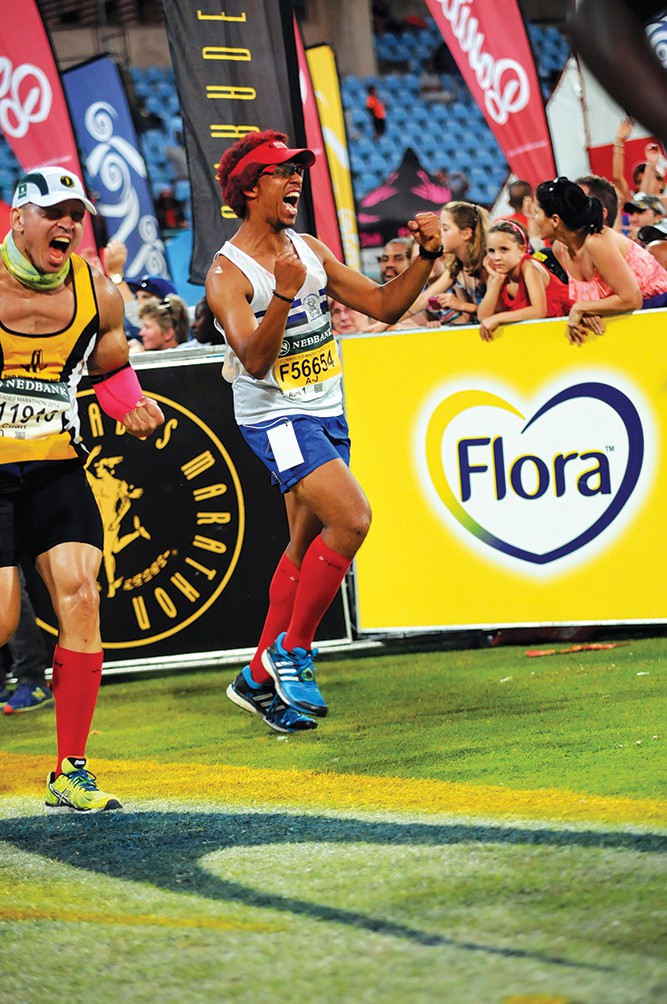 He comes bounding down the road in his Carbineers club colours and red socks, a huge smile on his face as he hugs friends and exudes a lust for life. He’s AJ Spieringshoek, high school teacher and hockey coach, runner, Red Socker and Unogwaja, and everyone he comes into contact with can’t help but catch his good mood and enjoyment of running.

Shocked… that’s the only way to describe the reaction of the Spieringshoek family in November 2012 when AJ told them he had entered the 2013 Comrades, and what’s more, that he wanted to ride a bicycle for 10 days from Cape Town to Pietermaritzburg as part of the Unogwaja Challenge before running the 90km ultra. After all, he had been a good 400m hurdler at school, as well as playing first team cricket and hockey, and had carried on playing club hockey after school, but he had never done any road running, nor had he done any cycling!

It all started when AJ heard Red Sock and Unogwaja founder John McInroy speak at the school where he was teaching in Cape Town. He was so inspired that he decided to enter the Comrades that same day and apply to become an Unogwaja. “I started training and did the Sundowner 10km in December, finishing in 52 minutes. There were a lot of people running and the race had a festive feeling, and that really gets you in the mood to run more, so it was a very positive start to my running career,” says AJ.

“I ran 2:07 in my first 21km at the Kloofnek Half in January, and then in February I did my first marathon at the Peninsula, clocking 4:26. Then came Two Oceans in 6:27. I only started cycling after Two Oceans, and most of my training was on a bike that was too big for me, until I got my KTM two weeks before Unogwaja, and it carried me through the ride. Then I ran the Comrades and finished in 11:46, the last Unogwaja home. The others finished in 11:42 and they were a bit concerned, as they hadn’t seen me for a while. Thinking about it all now still gives me goosebumps!”

Nearly two years after Unogwaja, AJ says he still gets people walking up to him to say they followed him in that 2013 journey, or saw him in the videos online, and how much he has inspired them. Typically humble at all times, he says that kind of feedback still blows him away. “We really were not aware of what we were getting into in terms of hype with Unogwaja. For example, at Comrades I met Greg Dove of the Royal Marines, who was stationed in Afghanistan. He walked up to me and said he recognised me from the videos on YouTube, and that our message was spreading all over the world. That’s just incredible!”

AJ (28) studied B.Ed at CPUT, taught at Fairmont and is now at Bishops, intern-teaching Maths and Information Technology, while also coaching the under-16 hockey team and third cricket side. He also coaches the under-18 Boland indoor hockey girls, the Foxes, who recently finished second in the National Pro Series. While teaching and coaching give him great satisfaction and joy, it is running where AJ now looks for his own sporting highs, and since his remarkable entry into running, he has improved his running times markedly. “I’ve learnt a lot in two years of running, and this year I will be looking to go sub-3:30 for the marathon, run 1:33 for the half and sub-40 for 10km. I would also love to run a Bill Rowan at Comrades, but for now a sub-10:00 will make me very happy. With Comrades, it is such a long way – you can set goals, but then the race will decide for you.”

“I just love being alive, and want to live my life as best I can. That’s the type of person I am – I go in wholeheartedly,” says AJ. “Every time I run, I want to smile, because I am using my god-given ability. I’m not going to win races or go to the Olympics, but I think I can inspire the average runner by being out there, sharing the same pain and joy on the road, and that makes me happy.”