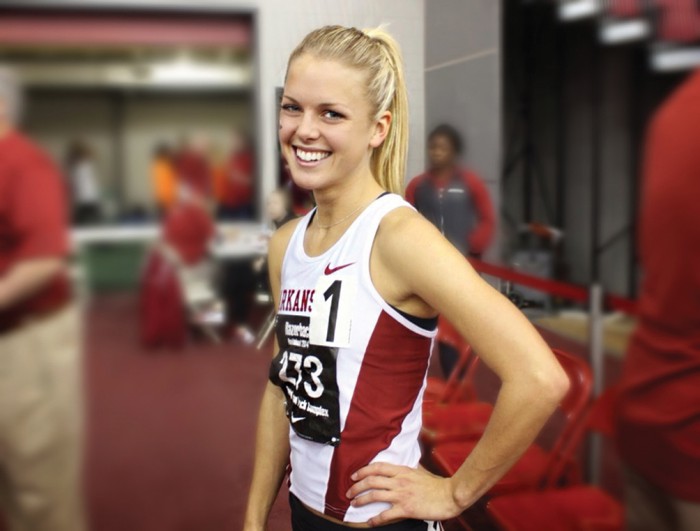 She’s been setting the Collegiate athletics and cross country circuits alight while studying in the USA, and now Dominique Scott is hoping to turn her good form into a ticket to the Olympics so she can race in the green and gold.

When Dominique Scott won the 2010 SA Junior Champs 1500m title in 4:36.94 (and the 3000m title), little did she know it was about to change her life forever. Her win was featured on the TV news that night, which prompted her proud mother, former Springbok triathlete captain, age group World Tri Champ and Comrades gold medallist Renée, to post the video on YouTube. It was seen by a number of university coaches in the USA who began trying to enlist Dominique to come run for them in the States on a full scholarship. “I was really fortunate that I got to go on a recruiting trip and visited my top three pick schools, and I ended up loving the University of Arkansas, which is in Fayetteville, a small town that reminded me of Stellenbosch, where I had really grown as an athlete,” says Dominique. “I really liked the girls on the Razorbacks team, and thought Coach Lance Harter would bring the best out of me – fellow South African Christine Kalmer also studied there and I had seen how she came in with certain times and was running faster by the time she left. That showed me that Coach Harter really develops athletes.” (She also met her soon to be boyfriend, fellow athlete Cameron Erfud, during that recruiting trip, and they have been together since she moved to the States.)

And so Dominique took six months off after matriculating at the end of 2010, then went over to the States in the middle of 2011 when the US academic year started, enrolling to study business marketing with a logistics minor. She will complete both courses in May this year, following which she plans to complete her Masters as well. “It is pretty challenging being a student-athlete, because I miss so much school due to travelling to meets, and we train like pro athletes, but still have to juggle classes and sport. I think most people in SA wouldn’t even be able to comprehend the amount of work that we put in. My high mileage weeks get up to 120km, and we don’t do junk miles, every run is a solid effort – and we race a lot. But they’re giving me an excellent and expensive education in exchange for four years of running for them, so you really want to run hard for your university.”

Dominique took up running at the tender age of seven, thanks largely to her mother. “I started running cross country for fun on Friday afternoons when I was in grade one, because my mom was the cross country coach at Herzlia Prep School and High School in Cape Town. I started to get more competitive and eventually won the SA Junior Champs. From there I ventured into track when I was in grade eight and loved it, so my mom looked for a coach for me and made contact with Johan Fourie in Stellenbosch. I started training with him twice a week, so halfway through grade nine I moved to Rhenish Girls High and started training with Johan on a daily basis. That’s when my love of running really blossomed.”

Under Johan’s guidance, Dominique won several SA Junior titles, or finished second to her great rival at the time, Caster Semenya, and she also ran for her country twice. Then came her big breakthrough at the SA Junior Champs and being spotted by the coaches in the US, and she has positively flown since then, although she first had to learn a few hard lessons about pacing herself. “That was hard for me to grasp at first, because in South Africa I had been winning race after race, but when I got to the States, I came to realise that the girls who are going to win Nationals are just playing around at the beginning of the season, because they know how long the season is. I learnt how to peak at the right time.”

Success in the States

In her Freshman (first) and Sophomore (second) years, she did enough to keep her scholarship while competing in the three main seasons per academic year, for cross country, indoor track and outdoor track. However, she felt she still needed to prove herself and justify her full scholarship, and then in her Junior (third) year, she says things just went crazy as she made a name for herself. “I won the South Eastern Conference (SEC) cross country meet and also helped my school get the team win, then went to Nationals and finished 28th. I was really pumped up after that for the indoor season, where I ran 9:02 to break Christine’s school record for 3000m, and we also broke the school record for the Distance Medley Relay (DMR). I won the SEC 5000m title and finished second in the SEC 3000m, and then at Nationals, my school won the DMR, which we had never done before, and I was second in the 3000m. After that, I got the outdoor school record for 5000m, and finished sixth at outdoor Nationals.”

More success soon followed in the first half of Dom’s Senior (fourth) year as she won five out of her seven cross country races, including winning the SEC title and the Regional title, and then finishing sixth at Nationals. “I probably worked too hard early in that Nationals race and cost myself a few places, but my coach thinks it was the best race I had ever run, because I really went for it.” Dom’s great results also saw her awarded All American status six times thus far. In NCAA collegiate competition, a top 40 finish at cross country Nationals and a top eight finish in indoor and outdoor track events are rewarded with this elite recognition, and this has turned Dom into a sporting celebrity in her adopted state. Now she not only has her name on several honours boards at school, but is often asked to do interviews, and is getting more and more invites to top level meets, where she often races professional athletes.

Looking ahead, Dom says her big goal in the upcoming track season is to qualify to run for SA at the Rio 2016 Olympics. “My goal as a little girl was always to go to the Olympics, so I was blown away when my coach recently sat me down to discuss what I want to run in Rio. We decided that my focus will be the 5000m in 2016, so this season I am going to work on my speed and look to get some international exposure in Europe. The next year and a half will be instrumental in deciding my future. There is a definite possibility that I will stay in the USA to run professionally when I finish studying, but I also miss SA – my family, the weather, the mountain and the sea, and the SA accent! But I am living my dream right now, and just enjoying every moment.”