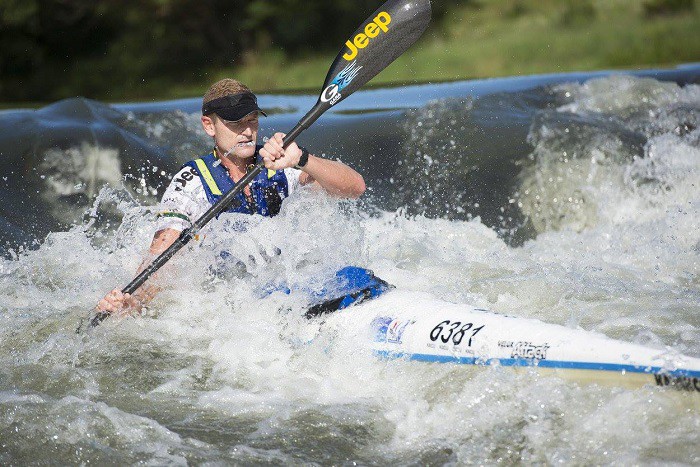 This weekend sees the Jeep Team competing in big events across South Africa, including the 64th Dusi Canoe Marathon, the Totalsports Xterra South African Championship and the season-opening race of the SA Cup Downhill Series and the Western Cape Provincial XCO.

One of the world’s greatest paddling events – the Dusi Canoe Marathon – is taking place this weekend 19-21 February, with Jeep Team’s multiple world-champion paddler, Hank McGregor, set for an altogether different experience from previous marathons as he competes in the Mixed Doubles category for the first time with his wife Pippa.
The seasoned Dusi paddler, who has won two Dusi Marathons and two Non-stop Dusi Marathons, says that, while he is looking forward to paddling in the social ranks, he won’t forget his competitive edge. “If we can possibly win the husband-and-wife prize that would be a real cherry on the top!” he adds.

The 2015 Dusi Canoe Marathon is being held in honour of its founder and world-renowned conservationist, the late Dr Ian Player, who organised the first official race 64 years ago, on 22 December 1951.

Dr Player also competed in the first Marathon and was the only paddler out of a field of eight to finish. It took Dr Player an epic six days to complete the first race, during which time he was bitten by a Night Adder. Player crawled to a nearby road and managed to get a lift to a police station where he received anti-venom serum and then continued paddling till the finish line in Durban.

An action-packed weekend for Jeep Team’s cycling crew sees MTB athletes, Pierre Smith and Thinus Redelinghuys, travel to Mpumalanga on Saturday for Race #2 of the Ashburton Investments National MTB Series, while Dylan Rebello will be competing in Round 2 of the Western Cape XCO Provincial Championships and on Sunday the 28km MTB leg of the Totalsports Xterra Grabouw. Also on Sunday, BMX athlete, Alex Dolman, will be racing in Round 1 of the Gauteng Provincial BMX Series.

Over 3 000 cyclists will be descending on the small town of Sabie, considered the ‘Mecca’ of mountain biking, to take on the 115-km UCI-classified National MTB event. Smith and Redelinghuys (who placed 38th and 17th respectively in Race#1) will be up against some of the best riders in the world, including Austria’s former world champion and winner of Race#1, Alban Lakata (Topeak Ergon); as well as South Africa’s Erik Kleinhans (Team RECM), Nico Bell (Team RECM) and Waylon Woolcock (Cannondale Blend).

Jeep Team’s cross-triathlon African champion, Michael Lord, will be competing in Race #2 of the Totalsports XTERRA Series, taking place at the Grabouw Country Club from 21 – 22 February.

The second event also doubles up as the Xterra South African Championship, with Lord aiming to hold on to podium, after finishing 3rd overall at Xterra Buffelspoort.

To prepare for Race #2 of the Jeep Warrior Series (happening next weekend), Jeep Team’s Thomas van Tonder, Jay Jay Deysel and Claudia Richard will also be travelling to Grabouw to race the 12.5km Puma Trail Run on Saturday.