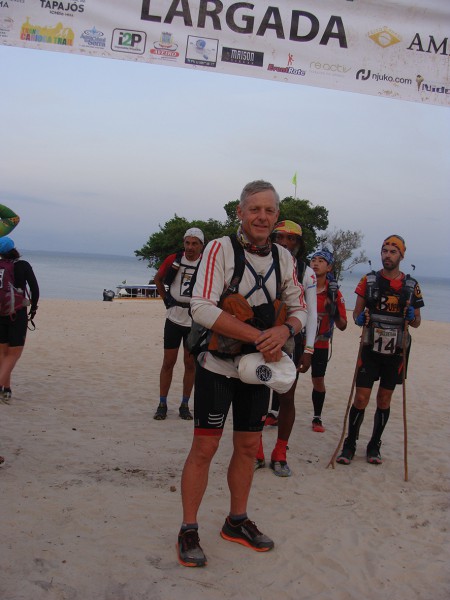 Voted by CNN as ‘the most difficult and wildest eco race on the planet’, The Jungle Marathon is an extreme seven-day 275km footrace through the Amazon Jungle in Brazil, and SA’s Anthony Erasmus was there to experience it. Here are some extracts from his ‘race diary.’

Arriving via river boat at base camp in the Flona Tapajos National Park, surrounded by unspoilt jungle on the banks of the Amazon River, the Bombeiros (jungle military firemen) briefed us on a list of warnings: Plants to avoid, creatures we may encounter and what to do if lost. Our race packs were kitted with food, hammock, T-shirt, shorts, socks and 2½ litres of water – all weighing in at 13kg.

Stage 1 – 27km (Running time: 7:51)
The terrain was undulating, with 14 steep hills of 50 to 250m, roots of the massive trees forming vertical buttresses 40cm high, and muddy marshes in between. The leaves fill the spaces between trees, making the jungle track look flat! The going was tough and slow…

Stage 2 – 28km (8:54)
Water points were stationed every 10km with dehydration a major threat, as you sweat profusely. I found myself taking in 15 litres of water, electrolyte drinks and energy supplements in water! I made a point of stopping every hour to check the colour of my urine. You learn to read your body.

Stage 3 – 34km (8:39)
In the second half the terrain eased and it actually became a ‘run’, not a hike/power walk. You’re told to shuffle your feet when entering rivers to chase away electric rays, but thankfully the Anacondas are shy and hide in the swamps. Ticks, however, are not shy, and infest your legs and nether regions.

Stage 4 – 42.2km (11:43)
Suddenly, I felt as though a spear had been launched into my leg. A half-metre long tree branch was protruding at right angles from my shin, and whilst removing it, the point broke off in my calf, but I was fortunate to have Cody from Texas with me. I massaged the foreign body below the muscle while Cody guided the broken end up towards the shin wound. It moved up slowly, with Cody wanting to pass out, but after guiding it up, Cody managed to pull it out thanks to a Swiss army knife.

I realised there must be small bits of bark in the tissue tunnel, so I placed the nozzle of my water bottle into the wound and flushed about 800ml of water through it, then packed it with an antibiotic ointment and wrapped it with a bandage and zinc oxide tape. I immediately started a course of antibiotics. Couldn’t have come at a worse time, with the 128km night stage next.

Stage 5 – 128km (36:05)
We were told the night stage had been lengthened by 20-odd kilometres! Setting off at 4am, we had to reach checkpoint six by 3pm, otherwise we were not allowed to continue until the following morning, because it was considered too dangerous to traverse after dark! Nearly half the field didn’t make it. Cody and I pushed ourselves and made it at 2:30pm, then got to checkpoint seven at 4:30pm and decided to take a break. There was a ‘foot medic’ there, and I needed him – I had five toenails wanting to come off!

We left an hour later and then Cody’s headlight packed up, so I gave him a little LED light. We got lost so many times! The trail is marked every 30m by ribbons, but they’re not particularly visible at night. At 10:30pm, we reached a muddy marsh that I can only describe as a quicksand bog. It took us two hours to get through 2km of swamp! We ran through the next day, passing the villages and schools that benefit from the money raised by the race, making it huge for the locals, and finished late that afternoon. Nothing felt as good as a swim in the warm, green river water.

Stage 6 – 16km (2:27)
My backpack had been reduced to 6kg as we ran along the ‘beach’ of the Tapajos River, and I reached the finish in a total time of 75 hours 39 minutes, in 14th position. If I had entered the Jungle Run knowing what to expect, I think the achievement would not so much be in finishing as in the courage it would take to enter it. What an experience!