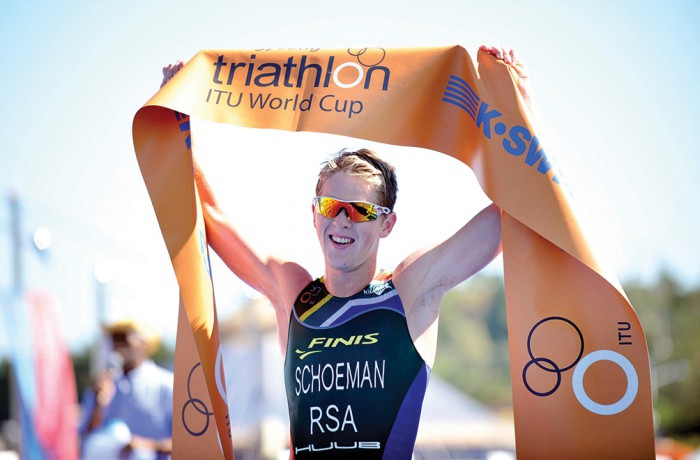 After two hugely successful years in the sport of triathlon, including four African championship titles, wins on the international tri circuit and a Commonwealth Games team silver, Henri Schoeman is fired up for the New Year while planning ahead for the 2016 Rio Olympics.
– BY LAUREN VAN DER VYVER

Two big wins in October really put the icing on the proverbial cake for Henri’s 2014 triathlon year, as the 23-year-old won the ITU Triathlon World Cup event in Tongyeong, South Korea and then defended his 5150 African Champs title in Germiston a week later. Earlier in the year, despite starting 2014 with an injury, he had bounced back with a bang to successfully defend his African Championship title in Zimbabwe in April, beating the likes of fellow South Africans Richard Murray and Wian Sullwald, and then in August he was in Glasgow for the Commonwealth Games, where he placed 17th in the individual event and helped the SA team win the silver medal in the mixed relay event, alongside Kate Roberts, Gillian Sanders and Richard.

With such a successful 2014 behind him, to go with an equally successful 2013, Henri’s road to the Rio 2016 is well on track, and he says that getting to the Olympics is very much his focus right now. “I always look at the bigger picture, and with the experience gathered in 2014, I can now focus on getting more podium finishes and wrack up as many good performances on the WTS circuit as possible this year to get qualified for Rio. The Olympics is always in my sights!”

Swim Sense
Born in Vereeniging, Henri moved to Durban at an early age and started out as a talented swimmer, also taking part in lifesaving, cross-country and duathlon for fun. “My parents wanted me to have a good sense in water, being by the sea, and growing up in an environment where your family is sporty, it’s quite easy to keep going.” That saw Henri take the natural step up to triathlon while still in school, and success soon followed as he won the under-19 title at the SA Triathlon Champs for two consecutive years, but it wasn’t all smooth sailing…

“The transition from swimming to running and cycling was slow,” he explains. “I picked up bad injuries in my shins. As a swimmer, you have ‘soft’ bones, so it’s a process to adapt. Then in 2011 I broke my collarbone after a fall, but it was definitely a blessing in disguise – because I came back stronger!” The enforced lay-off allowed Henri to concentrate on strengthening his legs as he worked his way back to full fitness, notably with pool-running, and it paid off. “There were times when I thought about giving up, but then the improvements came,” he says, “and with a good start in my first year on the international circuit in 2013, I learnt so much, could travel by myself and handle the pressure of it all.”

Success upon Success
That year, he picked up wins in the ITU African Cup,

ITU African Championships, 5150 African Champs, South African Champs (in the elite under-23 category), ITU East London Premium Africa Cup as well as the KZN Provincial Champs. He also placed 14th overall in the ITU World Triathlon Series, and finished the year with a world ranking of 10th position. Then came the success of 2014, which saw Henri add to his reputation as one of the world’s best up-and-coming young guns, and he says his achievements thus far in the sport are thanks to the hard work he has put in.

“I guess it’s down to discipline, to training three times a day, putting in two to three hard runs, one hard bike and two hard swims each week. I have one rest day a week, but I take an easy swim anyway! I have this inbred drive to perform and I like that triathlon is demanding,” says Henri. “I believe that the Olympics will be a reality, and I have to thank my family and friends for their support in getting me to that point. Also, as far as the sport goes, I think our two medals in Glasgow have opened people’s eyes. There is still hard work to be done, but that keeps me motivated!”