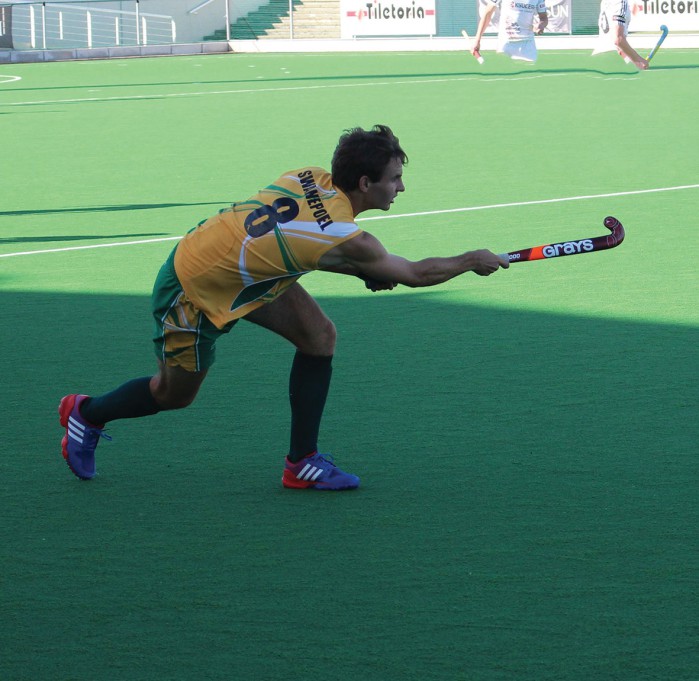 Running about 10km at almost full speed for a minimum of 70 minutes while focusing on skillfully handling a ball with a stick, that is the game of hockey in a nutshell – which is why South African national team defender Dylan Swanepoel never questions why running gets so much attention in training.  – BY EUNICE VISAGIE

He may prefer running in matches and technical training sessions to just running for fitness, but hockey star Dylan Swanepoel knows he needs to run. “Running is extremely important to a hockey player, but I think what’s more important is the type of running you do, and when you do it,” says the 21-year-old defender. “You need to be quick and explosive while having the endurance and strength to get through 70 minutes, so the timing of your training in relation to the season and matches is also very important, especially when it comes to training for your specific position, be it defender, midfielder or forward.”

“In pre-season we do a lot of running that is focused on building our base for the season, so it will include a lot of longer distances and endurance training, which we will do three to four times a week, depending on our progress. As we get closer to the season and in season, a lot of our running is done during training sessions where we are playing,” says Dylan. “Extra running after training will consist of more power and explosive running. This will include short and long sprints, ladder drills and change of direction. In-season running is used to maintain our fitness and keep us sharp as we do so much running during training and matches.”

Dylan captained the SA Under-21 team in the 2013 Junior World Cup, and made his debut for the senior side that same year in the African Cup, a qualifying tournament for the 2014 Hockey World Cup in the Netherlands, where he was the youngest member of the SA squad. “The World Cup was an unforgettable experience. The tournament was of such a great standard that I don’t think there will ever be another one like it, and to have been part of it, no words can describe it,” says Dylan, who at the time of writing had played 22 games for his country.

A natural leader, Dylan is already being touted as a future captain of the senior men’s team, and he is known for the way he keeps things simple at the back, playing effective hockey without being flashy, but he also has the skills to play the ball out of defence or do something special when the team needs it. However, for now he is just focused on cementing his place in the senior national team while also working towards finishing his B.Com Management Science degree at Stellenbosch University, where he is in his third year and is one of the key players in the varsity team. After getting his degree, Dylan has set his sights on playing club hockey in Europe and going to the 2016 Olympic Games in Rio de Janeiro.

Getting back to running, the longest distance Dylan has run on the road is 10km, and being an international hockey player, he says he prefers to run events just for fun, but it does not always work out that way. “I don’t start the race very seriously or to be competitive, but a few of the runs I’ve done with friends have ended up getting a bit competitive!” he jokes. “That said, in matches we can end up running anywhere between 8km and 10km, if not more, so hockey matches tend to turn into 10km races every now and then!”

For that reason, Dylan says he makes himself enjoy running, even when not with stick in hand. “I prefer the running that we have to do during training and matches. The fitness sessions I don’t enjoy as much, but I know how important it is if you want to be a successful player, so I try take as much out of them as possible.”