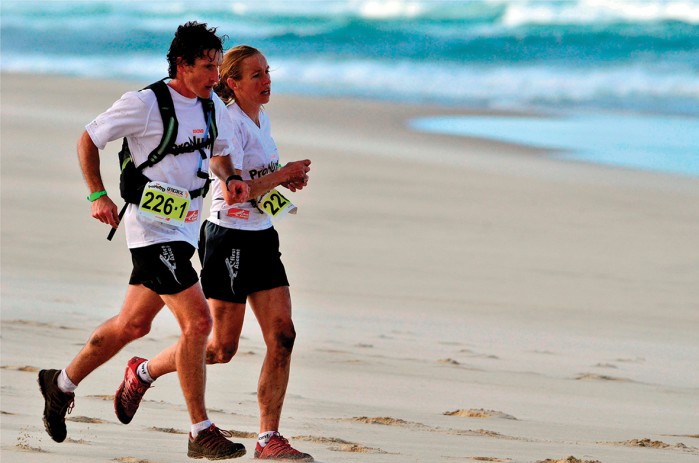 With seven kays to go in this year’s Otter African Trail marathon, Iain Don-Wauchope rolled his ankle and thought he had blown his chances of a third win, but he fought back and showed once again why he is one of SA’s finest trail runners. – BY SEAN FALCONER

Right from the start, the 2014 Otter was a three-way tussle between Iain, Madiba and AJ Calitz, Thabang put in a surge that dropped AJ, and when Iain hurt his ankle, the Gauteng flyer looked favourite to win. However, Iain was not done yet. “When I rolled the ankle I told Thabang to go and he immediately put in another surge. I thought he was gone, so I even stopped for water, but I think he burnt himself out a bit, and when I popped out onto the rocks with just two kays to go, I saw him just ahead and passed him walking on the rocks.”

Iain crossed the line in a new course record 4:21:30 for the west-to-east RETTO route, the ‘Reverse Otter’ run every second year, having pulled nearly three minutes clear of Thabang (4:24:27), and AJ clocked 4:31:17 for third. “Catching Thabang was actually a bit of luck, and I certainly thought AJ was the man to beat this year, but I think he had already expended so much energy pre-race because the focus was on him,” says Iain. “Perhaps if I lived in the Cape and did more events, instead of living in the Drakensberg Mountains like a Hillbilly, I would get more media exposure, but I think it works in my favour – no big sponsors, no media attention, no pressure. Even though I have now won it three times, next year the focus will probably once again be on AJ, Thabang or Lucky Miya, but that suits me.”

It is actually surprising that Iain (39) doesn’t enjoy as much media attention, because he boasts a mightily impressive sporting CV. In trail running, he has not only won the Otter three times, but has also won the ProNutro AfricanX Trailrun twice in tandem with his wife Susan, plus has two wins each in the Skyrun, Rhodes Ultra, Southern Storm and Mast Challenge, and has twice been selected to represent SA at the World Trail Running Champs. In multi-sport, he won the Western Province Duathlon Champs title in his age group in 2004, then the SA Champs title as well, and qualified for the World Duathlon Champs, and he’s also won the multi-discipline Totalsports Challenge, been part of the winning team at the Bull of Africa adventure race, and posted numerous wins in the Jeep, Mudman and Teavigo series.

In 2004, Iain admits he made a costly mistake when he raced the Half Ironman in somebody else’s number. “I raced without really knowing what I was doing, even borrowed a bike that was the wrong size, but then I finished 12th overall and second South African after Raynard Tissink! I never dreamt I would finish that high, so I had to admit to the organisers I was not legally entered, and they gave me a two-year ban from all Ironman events. The next day Mark Smith of GU invited me to join a team with Raynard to compete around the world in Ironman events, but I was now banned! That could have sent my career in a very different direction, and it was a very stupid thing to do.”

Iain grew up on a farm outside Greytown in KwaZulu-Natal, until the family moved to the central Drakensberg and established the Mountain Splendour Eco-Resort near Winterton. In 1993, while running cross country in his final school year at Maritzburg College, he was spotted by a talent scout and offered an athletics scholarship to Western Kentucky University in the USA, where he completed a B.Sc. Civil Engineering, Cum Laude. “I was torn, because I really wanted to go to Stellenbosch University, where many of my mates were going, but many people said I should take the opportunity. With hindsight, I would have loved to spend my first year or two of varsity in Stellenbosch, then go to the States when I was emotionally and physically stronger, because the American way of ‘more is better’ saw us doing 100 miles a week in training. We were basically doing marathon training for cross-country, and it burnt me out.”

Upon his return to SA in 2001, after five years in the States and two years backpacking the world, Iain also completed a Masters in Environmental Management at the University of Cape Town before taking over the family business in 2005. He married Su in 2007 and they now have two young children, but while all that was happening, he took a break from competitive running. “When I came back I got into mountain biking, adventure racing, swimming, paddling, duathlon and triathlon, and it took me many years to focus on running again. Now I believe in more speed work and rest than doing high mileage. I actually do very little training these days, only about 60km a week, but people don’t believe me when I explain how little I did before Otter. I think the key was being undertrained, arriving at the race without any expectations.”

Something New to Try

Looking ahead, Iain says his plans for 2015 include running AfricanX again with Su and defending his Otter title, and if the dates work out, he would love to give the Table Mountain Challenge and Cape Ultra Trail events in Cape Town a go. Looking abroad, Iain hopes to once again be selected for the SA team for either the World Long Distance Trail Champs or the later World Marathon Trail Champs, but he also has a few obstacles he’d like to get over during the year. You see, just after his Otter win, Iain decided to try obstacle racing for the first time at the Impi Challenge Gauteng – and promptly won it!

“I felt like a kid on the farm again, just having fun, but it was a relatively easy course. Then came the Stellenbosch Impi, featuring a lot more running, which suited me, but the obstacles were also tougher, especially carrying a concrete block, and that allowed Stuart Marais to pull away for the win. I felt a bit jaded on the day, but now I am really excited to do more obstacle events. However, I think I will stick to the Impi, because to do the Warrior you need to put yourself in the gym five days a week. The Spartan series is also coming to SA, so I will look which events suit me best, with more focus on running and less on strength.”