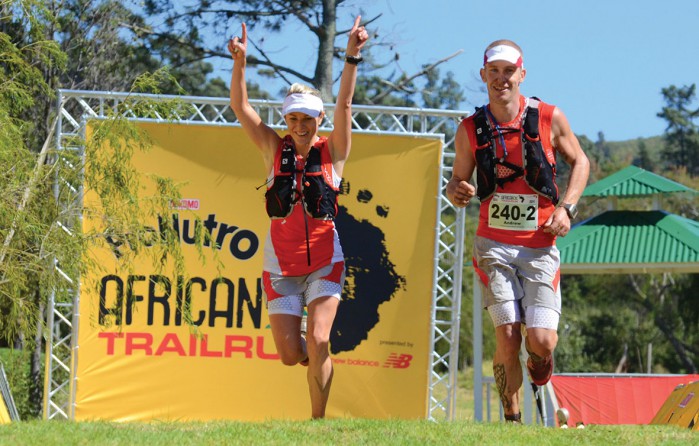 It was all going to plan for trail star Megan Mackenzie earlier this year as she picked up win after win, until a nasty injury sidelined her and forced her to withdraw from the Trail World Champs, but she’s determined to bounce back stronger than ever.
– BY LAUREN VAN DER VYVER

Having won the Pronutro AfricanX, Lisa’s Forest Run, Northern Trail Challenge and Mnweni Marathon in 2014, Megan Mackenzie was in the SA team to go to the USA for the World Long Distance Trail Champs in August. However, a fall at the Mnweni Marathon put paid to her World Champs dream, and she described that race experience as both a best and worst moment.

“I trained hard for Mnweni because it was a World Champs qualifier and I won, but the fall affected me. It started as little fractures in my hip and expanded like a car window cracking when I fell.” Two months after falling, she still hoped she would be ready for the World Champs, but training just made the problem worse and Meg ended up on crutches for eight weeks. “I injured myself more. It was a huge disappointment withdrawing, but all I’ve done is shift my goals instead of giving up.”

Born on a farm in Cato Ridge in KwaZulu-Natal,

Megan went to boarding school at St Anne’s in the Midlands and went on to study economics and politics at Rhodes University before completing her Honours in International Relations in the USA. Later, she completed her Post-graduate Certificate in Education (PGCE) and did a specialised course in dyslexia, and now works at Bellavista School in Johannesburg. Growing up in an active family, she tried her hand at canoeing, cross-country and adventure races, but says she only took up competitive running in 2011, and found her niche in trail running the following year.

“It was July 2012 at the Rhodes Ultra Trail where I won and broke the ladies’ record,” she says. “I wasn’t trained properly and I didn’t wear a watch. I just ran. Salomon then approached me to be an ambassador and put me on their elite team and everything spiralled from there.” Last year, Megan won the Mnweni Marathon, Redbull Pyramid Challenge, Thule 4 Peaks and Rhodes Ultra, also bagging podium spots at the Redbull Lionheart and 3 Cranes Challenge. She was also fourth at the Otter. “I’ve got a strong mind for the bigger distances,” she explains. “I find in stage races, it’s three days where you can get absorbed. You spend time with athletes, you reflect, you work out what you can do better. I love strategising!”

Looking back, Megan recalls her mixed category win at AfricanX earlier this year with teammate Andrew Erasmus as something that stands out. “I didn’t know what to expect because I hadn’t raced with anyone before,” she says, “but it was unbelievable, because Andrew and I just gelled. We didn’t win stage one, then we won stage two, but we were behind so we needed to catch up time on day three and it was incredible being able to do it!” The pair finished tops, even though they had to wait a minute before they figured out they had clinched it. “What relief! The great thing was that we got to share that feeling…”

Later in the year she then found out how to deal with the lows that followed. “I could have easily let go after three months out, but my brother, family, friends, my team and work colleagues have been so supportive!” Now Meg is focused on getting up and running again, keeping up cardio by cycling and swimming a couple of hours a day, going on the anti-gravity machine and doing rehab and strength work. “My coach Neville Beeton has been positive and we’ve been able to start from scratch again properly. Next year there is World Champs in July and the Otter to aim for, and my mantra is ‘Run happy, light and free.’ I just remember that I’m doing what I love, bouncing along a trail!”