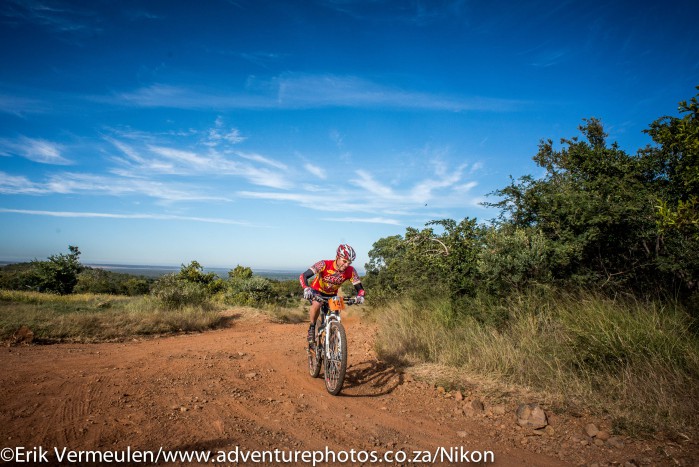 After a busy three days of mountain biking, riders can all give themselves a good pat on the back for some fantastic riding. This is the second year the Nedbank Save The Rhino Mountain Bike has been hosted, this year at Mabalingwe Nature Reserve, sponsored by Nedbank, to help tag the rhino’s in the Reserve. The 3 day stage race allowed people of all levels to participate and enjoy the beautiful surroundings, while also getting up-close an personal with some challenging terrain. The TriSport and Mabalingwe teams set out the routes, as the race had various options for the riders, to do either a 1, 2 or 3 day.

Riders who were only doing the 1 Day option could choose between a 10km, 30km or the 62km. Those that chose to do the 10km and 30km had a relaxed, less technical route, and came racing to the finish after enjoying the shorter fun ride. They had the opportunity to ride through a heard of buffalo and saw various species of antelope. Winning the 10km, Christo Lombard, our junior hero for the weekend, came racing over the line with a smile on his face in a time of 27:18. Also racing to the finish to win the 30km, was Johan Gouws in a time of 1:10:18. All the riders then spent some time at the race village, swimming, enjoying food and drinks, and waiting to see the longer distance guys cross the line.

Day 1 was the most challenging day for the event, at 62km, taking riders around the Reserve, over a few hills, rocky outcrops, through thick sand, beautiful single track and over the monster of the day, Kubu. The winner of the 1 Day, 62km, was Gregory Hill who was cheered on coming over the line, finishing in a time of 4:02:19. For the 2 and 3 Day riders, Anton Smal came in 1st overall for the stage 1 of Nedbank Save The Rhino Mountain Bike. Some athletes crossed the finish line shaking their heads at the challenging day they had just finished, others still smiling after completing a technical day cycling. Keeping spirits high, they had time to relax and massage tired legs whilst looking forward to day 2.

Day 2 was a shorter, and easier day for riders, taking them around the reserve on a 56km route. The route took riders through a heard of buffalo and some were lucky enough to see some rhino in the reserve, the motivation for this special event. The 56km involved some smaller hills, rocks and some thick sand. The consensus from the athletes was that it was quite a bit easier than day 1. This was seen as they came over the finish line with massive smiles on their faces and ready to take on day 3. Anton Smal was 1st over the finish line winning stage 2. The winner for the 2 Day Nedbank Save The Rhino Mountain Bike was Grant Frerichs in a time of 6:00:57.

Day 3 was the last day of the Nedbank Save The Rhino Mountain Bike, with riders lining up at the start with smiles on their faces, ready to race. The 63km route was also easier than day 1 taking riders over some more hills, namely the Vodacom hill in the reserve, and past the glorious ‘kings of the jungle’, Mabalingwe’s lions. Over the three days, various riders made a concerted effort to try catch the person in front, chasing a podium position. Some feeling like the only way they’d be able to catch up, would be the person in front running out of steam or one suffering a mechanical failure. Pieter Duif had been chasing Smal for the whole 3 days, trying his best to get sighting of Smal’s dust. Duif came in 2nd in an overall time of 8:40:22. Smal took the podium for 1st place with an overall time of 8:27:12. With cheers for the ladies, Esmari Goosen was our first female across the finish line in a time of 10:17:47, smiling from ear to ear. A brilliant and exciting 3 days of mountain biking in the Mabalingwe Nature Reserve!

Without any major hiccups, all riders enjoyed a weekend of spectacular mountain biking. We were all grateful to the weatherman for sending through sunshine and warm weather, so everyone could enjoy the event. The final results and links for the beautiful photos, of the race will be posted on www.facebook.com/trisportsa. Well done to everyone who participated in the event, and also to those who dedicated time and donated money to saving the rhino’s at Mabalingwe Nature Reserve. Tagging of the rhinos will take place in June 2014, just after our Nedbank Save The Rhino Trail Run Event 14 & 15 June 2014.

By Shona Kelly and Sonja Terblanche-Otto (MSc Exercise Science) from TriSport and organizers of the Nedbank Save The Rhino 3 Day Mountain Bike at Mabalingwe Nature Reserve from the 26-28th April 2014.