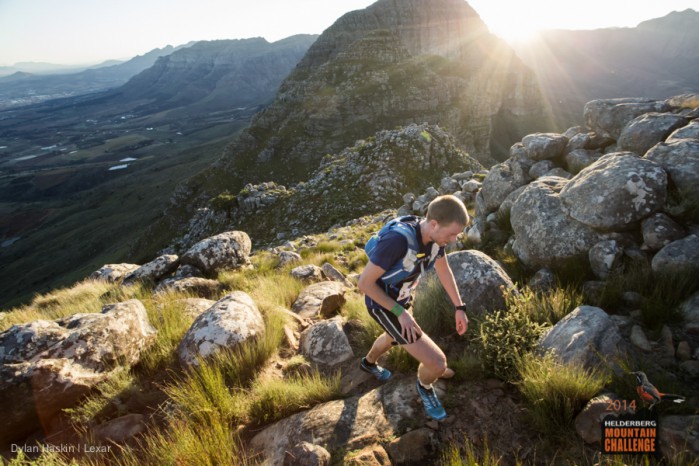 The Helderberg Mountain Challenge (HMC), now in its fifth year, is one of the most spectacular but brutal trail runs on the calendar and, with jaw dropping views, unspoilt single track and sublime technical descents, it is not for the faint hearted. The weather played along at this year’s version and, as expected, one record after the other tumbled.

Duncan o’Regan secured his second win in the Mountain Challenge Series and smashed AJ Calitz’s record by eight minutes. He was the first runner in the history of the event to break the 3-hour mark and blitzed the 24km course (including almost 2 000m vertical ascent) in 2:58:26. In the ladies field Katya Soggot followed suit and broke Landie Greyling’s record from 2013 as she came home in a time of 3:35:56, more than 30 minutes in front of her closest rival.

In the HMC Lite 15km veteran, Chad Gordon proved that some things do get better with age as he led from start to finish to win in a time of 1:31:36. Liandi van der Westhuyzen claimed her second win in the Mountain Challenge Series Lite after winning the JMC Lite two weeks ago. She crossed the finish line as first lady and fifth overall in a super time of 1:45:06.

Raydon Balie continued his impressive streak and also broke the HMR 10.75km course with a time of 46:23 while the Leslie sisters once again showed their class as they crossed the finish line basically together to win both the open and junior categories. Caitlin won the open category with a time of 57:26 while Megan won the juniors in a time of 57:27.

A big thank you to the Helderberg Nature Reserve staff and the Friends of Helderberg for their tireless work out on course and at the finish line. Their energy and happy nature goes a long way in ensuring the HMC remains a tough, but awesome race.

For more photos from the event and full results visit the website at www.mountainchallenge.co.za.