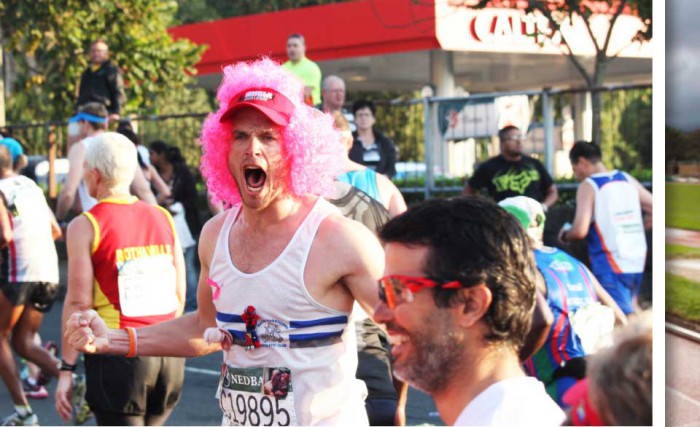 On the 1st of June a group of 12 runners clad in red socks and fancy dress will line up in the CC batch of the 2014 Comrades Marathon – and if last year is anything to go by, The Unogwaja Challenge team will be running, cheering, dancing and ignoring all the age-old wisdom that warns Comrades runners to start slow and conserve energy! – BY FEIGE LEWIN

The Unogwaja Challenge traces the footsteps of Phil-Masterson Smith, the youngest ever Comrades winner in 1931, aged just 19. Two years after his win, due to the economic depression, he could not afford the train fare to Natal for the Comrades, so he cycled for 10 days from Cape Town, then ran the 89km ultra on day 11, placing 10th! Phil was known as Unogwaja – the Hare in Zulu – and this will be the fourth set of present-day Unogwaja cyclist/runners that will take on the challenge. What makes them so phenomenal is not only that they cycle 1750km from Cape Town to Pietermaritzburg in the 10 days preceding Comrades and then run the race on day 11, but that they do it all in the name of charity.

Last year’s Unogwaja team raised R500 000 for the Comrades Amabeadibeadi Charities (The Pink Drive, Wildlands, Worldvision, Starfish Greathearts Foundation, PMB Community chest and the Sports Trust), and when Unogwaja founder John McInroy saw what the 2013 team was able to accomplish, he set his mind on doubling that figure in 2014. “I believe one day, with the full force of the Red Love Train behind us, we are going to raise R10million in one campaign! But this year to raise R1million will be truly remarkable. Just a few years back it would have been deemed inconceivable!” Some might label him a crazy dreamer, but by mid-April the 2014’s team fundraising tally had already passed the R600 000 mark!


This year’s Unogwaja team is a unique mix of exceptional men and women who cross the age divide, from South Africa, Portugal, Germany, Kenya, Northern Ireland and Brazil. However, these basic stats are just about the least interesting thing about them. Take Tiago Dionisio as an example: He has completed 13 consecutive Comrades since 2001 and is the Portuguese Ambassador to Comrades, and in 2013 completed the Unogwaja Challenge. In March, he joined the list of the world’s ‘Mega Marathoners’ by completing his 300th marathon, in the same month he turned 40. His marathon list features multiple international races, including the Western States 100 miler, which he ran a week after his 2006 Comrades finish!

“My 300th marathon was on the last day of an event that included seven marathons in seven days. The previous weekend I had done two marathons, so I had just finished nine marathons in nine days! I had never run so many marathons in a row, so this also made the 300th special,” says Tiago. He also got to share his special moment with his partner, Rita Manso, who will also be part of the 2014 Unogwaja team. She is a full-time mom, professional businesswomen and ultra-runner in her own right, and as Tiago was running his 300th, she ran alongside him to complete her 50th marathon.


But what makes Unogwaja truly unique is that the team is not just made up of seasoned athletes, but rather of people that show spirit and heart, like newcomer Danielle Mascher. Dani has two Comrades back-to-back finishes to her name, but only started cycling a year ago, and joining the first day’s ride of the 2013 Unogwaja Challenge was her first public cycle. It was also the first time she put headlights on her new bike – and the first time she knew Unogwaja was in her future! “It feels as though each person’s part in this journey is ordained by something bigger than us all!” says John. “And when the time is right, it cares little for how far you have ridden on a bike before! Let the whispers in your heart be your guide! This journey is not about the bike or running.”