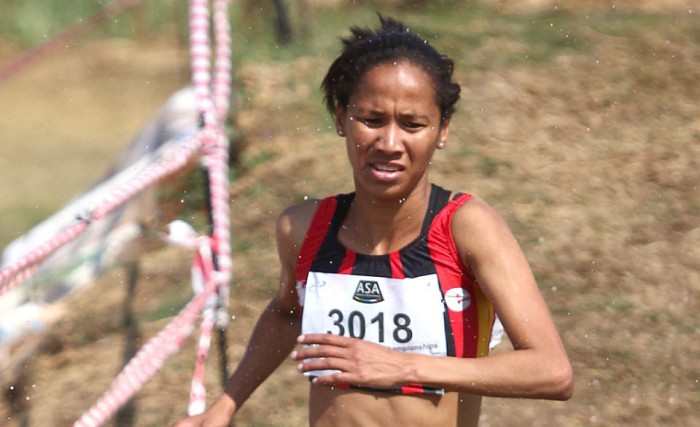 In February Nolene Conrad picked up her maiden SA 10km title with a stunning PB time, and now she’s gunning for her first marathon in Germany at the end of April, as a stepping stone to the Commonwealth Games.

Going into the SA 10km Champs in Bloemfontein in February, Nolene knew she was in great shape and expected to improve her PB, but just how fast she managed to go still came as big surprise. She finished in 33:37, shaving 27 seconds off her previous best, to add her first national road title to her collection of titles on the track and in cross country. “I knew I was in good shape, but I did not expect to run that fast. I was in a positive mindset – I wanted to win, I was determined, and I was hungry for that title. The way I approach races now comes from my coach Hans Saestad and my mentor Elana Meyer. We’ve outlined goals, and Elana, along with support from Endurocad, is always there for racing tips, so I’m more positive now, and that mentality has helped me see good results recently.”

Cape Town-born Nolene (28) actually started running at 16 because of her health. “I suffered from asthma, so my doctor said it would help, and today my condition is gone!” She took a gap year after Matric to focus on her rapidly improving running, then made the SA Student Team for cross country when she began studying teaching at the University of Johannesburg. Nolene initially focused on the track and represented SA at the 2006 Commonwealth Games and All African Games in the 3000m steeplechase. She went on to compete in the World Student Games a year later, as well as in 2009 and 2011, and by 2012 she was ranked number one in the country not only for the steeplechase, but also the 3000m. In cross country, she won a silver medal at the SA Champs in 2011, and the following year won silver at the Southern Region Champs in Mauritius, claimed gold in the SA Champs later in the year, then represented SA at the 2013 World Champs in Poland.


In between that she regularly made the top 10 in Spar ladies races and did well up to the half marathon distance, going on to make the SA team for the 2012 World Half Marathon Champs in Bulgaria, where she finished 37th and second SA woman over the line. Now she is about to line up in her debut marathon, in Hannover, where she will be chasing a 2:37 qualifier to get into the reckoning for the SA women’s marathon team for the Commonwealth Games. “Mapaseka Makhanya and Cornelia Joubert managed to move up to the marathon quite easily, and I’ve got support from Hans, Elana, my sponsors as well as family, friends and colleagues, so I have to be positive as well.”

“At first I hated doing longer stuff, but I’ve become used to it. I get to 160km a week now, piling in the training before work, and then I have afternoon sessions with my coach at Vorentoe Hoërskool, where he is the headmaster and where I’ve been teaching Social Science and Creative Arts for three years. That’s why I am especially proud of my achievements, because I am working a 7pm to 2pm job and still do well in my sport. It takes a lot of discipline and commitment to manage both.”