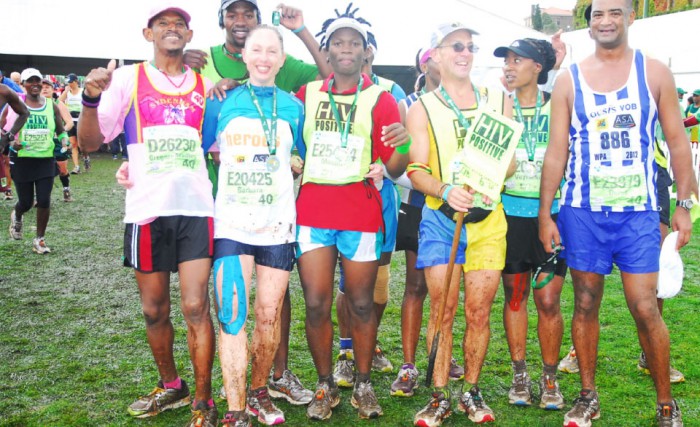 Vuyiseka Dubula and Mark Heywood formed the TAC (Treatment Action Campaign) Runners for Health group in 2011, to support HIV positive runners and the work being done by TAC to ensure that people living with HIV have access to life-saving treatment, which has now helped to make it possible for 2.1 million people to be receiving the much-needed drugs. One of the running group’s most special moments came in the wet, windy 2012 Old Mutual Two Oceans Marathon.

Mark: In 1994 I was recruited by Zackie Achmat, who was living with HIV at the time, to work for the AIDS Law Project. This is how the journey of TAC began and how I got to meet Vuyiseka. She was the big inspiration behind TAC.

Vuyiseka: I joined TAC in 2001 after testing HIV Positive, and Mark and I started working closely. I couldn’t understand how this man who was quite a bit older than me could be doing all this running, and I thought he was completely crazy. I still felt like I needed to challenge him on this, but at first I refused to go run with him. Then there was a specific day in 2010 that he gave me his Comrades medal he received in 1996 and said I could keep it until I had gotten my own. I then thought I should be able to do this if he can. This is when Mark and I started TAC Runners.

M: We are usually about eight runners that line up at the start, but we end up picking up about 60 to 70 runners en route, and the Two Oceans race in 2012 was specifically very special to me. It literally rained from the first step to the last. We sang the whole way and ended up being a big bus at the end of the race. It was incredible how people regarded us on the race and even the supporters cheered us on. It was a wonderful experience.

V: The wind made it tough! Especially on the downhills as it swept us up from beneath. We were each struggling with different aspects of the weather, but kept motivating each other. All of us strangers became so close during the race that we ended up knowing each other by name by the end. Mark kept us on track and we had to often tell him to slow down!

We sing from the very start of each race and end up sweeping up all the strugglers on the road, and the music carries our tired legs to the end. In that Two Oceans, Shosholoza was a big favourite on the day, but on the uphills it was rather tough to get enough breath to sing it properly. When we got to Constantia Nek we were all pretty exhausted and the singing didn’t hold up as well, but when we got to 5km before the finish, we raised our voices and the energy carried us to the end. It was an unforgettable day and race. I look forward to this year’s Two Oceans.

M: I have been running for 20 years and done 101 marathons, and this is definitely something that has changed the dynamic of my running. I would possibly have stopped running if it wasn’t for this exciting group that we started. Running to me means peace. I find that there is a dignity and equality in running and the more people we can get to join us, the more lives we can change.

V: The health benefits of running have been amazing. Running makes my mind healthy, and therefore my body follows the lead. I have found that the running has given me self-confidence, and a sense of happiness and achievement after completing a race. The feeling you get when crossing the finish line is so extraordinary! When I am running I think of nothing – with every kilometre I let go of my burdens. Running has taught me and fellow TAC members about life, that when you’re running, you have an end goal in sight, and that’s how you should think about life, too. It also gives us something else to talk and think about than the disease.

Our TAC Runners group doesn’t only consist of HIV positive runners. The ‘positive’ in HIV also stands for someone doing something positive for people living with HIV. There is no official membership – if you believe in being active, then you are a member of TAC! And it’s not about how fast you run, but the fact that you are going to finish. We believe there is no excuse for HIV positive people not to get out on the roads, because we have fought to get the ARVs and we now have the same life-expectancy as HIV negative people.

Check out the TAC website at www.tac.org.za, and you’ll find the TAC Runners at www.facebook.com/groups/runnersandwalkersforhealth.