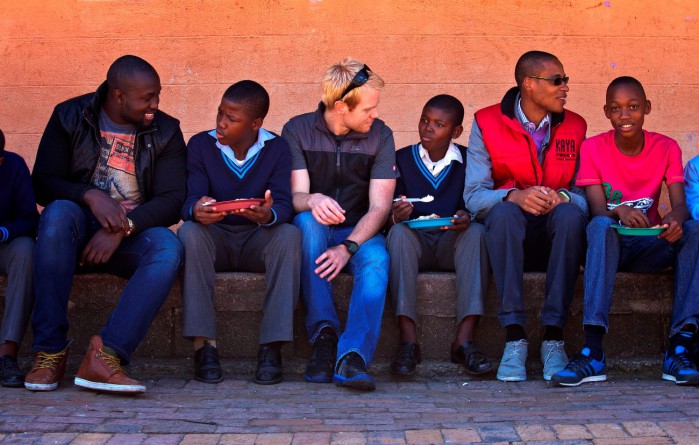 Seven of South Africa's best-known media personalities will be running the Old Mutual Two Oceans Marathon on April 19 as ambassadors of Old Mutual’s More Than Yourself campaign.

The campaign aims to raise R400 000 to supply more than 3 000 pairs of school shoes to underprivileged children through the Put Foot Foundation.

Mhere will be running the Old Mutual Two Oceans half marathon for the first time, but he is no stranger to running. He has been active in the sport since the age of five, and was a sprinter at university level.

“I think it’s such a challenge to put your body through something like this but it's a challenge that's worthwhile — an accomplishment, really,” he says. “The fact that I'm running for such a great cause as well makes it all the more worthwhile and special.”

Mhere says he is honoured to be raising funds for the Put Foot Foundation, which supplies locally made leather school shoes to children in need.

“It means so much to me to know that my involvement and my support for a cause like this can really make an impact,” he says.

“I'm also very honoured to have been asked to represent the foundation. Giving back is something I always try to do.”
Old Mutual’s ‘More than Yourself’ campaign was launched to motivate community-minded South Africans to join Old Mutual in raising funds for worthwhile causes.

Mokaedi Dilotsotlhe, General Manager Marketing for Old Mutual, who is running the ultra-marathon under the More Than Yourself banner, says: “Creating a better South Africa starts with uplifting our most vulnerable communities. It starts with caring enough about people’s daily struggles to do something meaningful and positive to change their lives.”

The Old Mutual Foundation is supporting the More than Yourself campaign by matching the money raised, up to R200 000.

“If we reach our target, it means we can put school shoes on the feet of 3 000 children,” adds Dilotsotlhe.

Kaya FM’s Whitehead is also delighted to be able to give something back. Like Mhere, Whitehead was an active athlete in high school and university. He took up the sport again in 2007 and has been running regularly since then.

“It's a beautiful scenic marathon and a great weekend in Cape Town,” he says.
“There's also the added incentive of the R1 million Old Mutual is offering to the first male and female runners who break the race record. It may not affect the amateur runners, but it definitely adds to the vibe and prestige of the race.”

Whitehead jumped at the chance to join the Old Mutual More Than Yourself ambassadors. “When I heard about this campaign, it was as if it was written in the stars,” he says. “I'm really happy to be able to do something for underprivileged kids.”