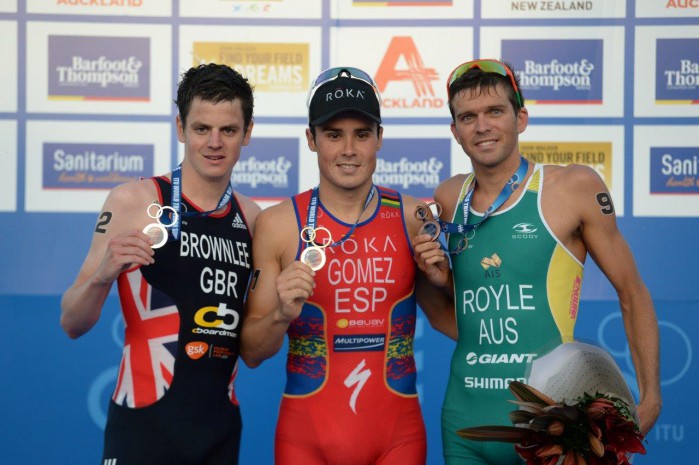 Alistair and Jonathan Brownlee would like to avoid a showdown with Javier Gomez at the Discovery World Triathlon Cape Town on Sunday, 27 April.

Alistair (25) is the current Olympic Champion and Jonathan (23) is a former World Champion and winner of the bronze medal at the 2012 London Olympics where the British Brownlees became the first brothers to be together on the podium in an individual sport at the Olympic Games since 1908.

Alistair, Jonathan and Javier Gomez (ESP) will be the favourites along Cape Town local Richard Murray to stand on the winner’s podium. The Cape Town event in the ITU World Triathlon Series will be held at the V&A Waterfront. The women’s race is on the Saturday (26 April) and the men on the Sunday.

For both the Brownlees it will be their first visit to Cape Town. “I'm really looking forward to racing in Cape Town. I’ve been to South Africa before, but never to Cape Town,” said Alistair. Jonathan has never been to SA before. “I’ve only been to Africa once when I climbed Kilimanjaro. I am very excited to see what the country has to offer.”

Both Alistair and Jonathan are looking forward to race on the route that was announced recently. Action will start in front of the Table Bay Hotel and finish at The Lookout. The Elite swim over 1500m will have a dry start at Quay 6 in front of the Table Bay Hotel. Athletes will swim two laps of 750m each. The course will be confined to the Victoria basin, providing spectators the chance to view the action for the entire duration of the swim. The first transition area is located at Quay 6, in front of the Table Bay Hotel. The cycling leg over 40km will leave T1 in front of the Table Bay Hotel. Upon exiting T2 at The Lookout, the 10km run course will lead athletes onto Beach Road where the first Water Station will be located within 100 meters. Circling Cape Town Stadium, the course will turn left at Fritz Sonnenberg Road. The second Water Station will be located at the turn into Fritz Sonnenberg, 600 meters from the first. Athletes will turn left once more into Granger Bay Boulevard. The third Water Station will be placed at this turn. The distance between the second and third Water Stations will be 900 meters. To complete a lap, athletes will turn left from Granger Bay Boulevard onto The Lookout and pass through the grandstands again. After four laps of 2.5 kilometers each, athletes will reach the Finish Line at The Lookout.

“It looks very scenic, especially with Table Mountain close by. I think it's great that they're using the City landmarks like the Cape Town Stadium and V&A Waterfront,” said Alistair. Jonathan added: “I am looking forward to running down the sea front. Sea swims are always good fun as well.”

Alistair has been setting the standard over 10km for the past few seasons. Running sub 30 minutes over 10km has become a regularity at ITU World Triathlon Series events. Along with Alistair and Jonathan the other speedsters on the circuit include Gomez, Murray and Mario Mola. “Gomez is a big threat after winning in Auckland and if Mola is up there when the run starts, I think he could also be a challenge,” said Jonathan who finished second behind Gomez in Auckland. Alistair did not race in Auckland, but he also agreed that Gomez now has the confidence along with the form and that will make him very dangerous come Cape Town.

Neither of the Brownlee brothers have ever stood back for a challenge and both have their eyes on the top of the winner’s podium. And both agree that the final 10km will be decisive in who is eventually going to win the first ever ITU World Series Triathlon race on the African continent. “I want to win. I’m hoping to turn up in good shape and try to win the race. It's a pretty neutral bike course so I think it'll come together for the run,” said Alistair. Younger Jonathan is hoping to get the better of his brother, Gomez and, he jokingly adds, the V&A Waterfront seals apparently. “I’m going to try and win too. Hopefully beat Alistair. The most challenging leg on the day will be the run!”