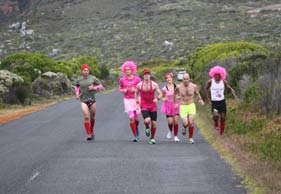 There we were at the Cape Point
Lighthouse on Friday 29 March, six runners dressed up in pink outfits more akin
to a gay pride parade as Japanese tourists snapped away with their cameras. The
six were Charles ‘Zoog’ Haynes, Alana ‘Doylie’ Doyle, Robert ‘Brundle’ le Brun,
Guy Allen, Alister ‘Dream’ Wilder and myself. We ran along the Puffer Route
over Table Mountain to the bottom of Platteklip Gorge, and from there made our
way back along the contour path to Newlands. We got back to my house at 2:35am
– 15 hours, 35 minutes and 70km later, according to the one Garmin we had
between us – having been joined by more than 10 other runners along the way,
and seconded by still more.

Less
than four hours later, four of us lined up for the start of the Two Oceans ultra,
and all went on to complete an epic 126km journey. Unfortunately, Alister
twisted his ankle badly late on the first day and took no further part, and
Zoog did the entire Puffer section like a champion, despite an injury, and thus
did not start Oceans, but the rest of us did it, with Brundle just making the
final seven-hour cut-off by a few minutes. His raw emotion will be etched in my
heart forever. A moment to savour for life!

This was the Lettie Run 2013,
inspired by fellow runner Lettie Haynes, who last year went through a tough
battle with breast cancer, supported all the way by husband Zoog. She seems to
have won that battle, but she could not have done it on her own, and I think
the group photos of the Lettie Run capture the essence of what inspired us to
do it, and what enabled Lettie to beat a really nasty illness. It sums up the
spirit in which two very special friends of ours tackled a really tough thing
together. It’s amazing how far a sense of humour and a truckload of love and
dignity will take you.

That why we decided to support the
Pink Drive with this run, hence the pink outfits, and it was epic the way we gathered
troops as we ran, like Forrest Gump! Also, thanks to a Brundle-inspired rule, every
FH (Fire Hydrant) sign painted on the road meant “Free Hug” and
everyone piled in! It was pretty sweaty in there, but it reminded us regularly
not to take ourselves or the run too seriously! And I’m sure it provided some
form of entertainment to any passers-by!

But it’s our support crew that truly
show the essence of Lettie Run, and all the other events that we are part of, which
simply would not happen without people who selflessly give of themselves. This
is why Jamo made event stickers for his car, why Brundle’s old man, Stanley, gave
up his entire public holiday to support his special son, why Bryony made
nothing seem like too much trouble, and why Lettie flew down with Zoog from
Durban to give her support and inspiration as the person who has brought us all
together. And there were more people who chipped in. Big or small, it made a
difference to us, and we salute you all.

This run was truly magical. Where
there is heart, incredible things happen. It will live in us forever, and
hopefully will inspire us and many more people to do many more great things,
Lettie Run 2014 being one!