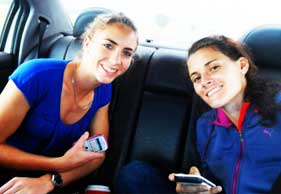 It is
isn’t often that an athlete finishes first in an SA Champs event to claim a
first national title, and then feels guilty for winning, but that is what
happened to 400m hurdles champ Annerie Ebersohn at the 2013 SA Track and Field
Champs in Stellenbosch last April. She was drawn in a lane outside of her
friend, clubmate and training partner, Wenda Nel, the defending champion, and
expected her big rival to come up on her inside during the final, but was
surprised to see no sign of Wenda at the finish line.

“It was a
bittersweet race for me, because once I crossed the finish line I realised
Wenda had fallen. Yes, I was happy I had won, but at the same time I had taken
the title from my great friend. Also, the question in my mind was, would I have
won if she didn’t fall?” says Annerie. “Later that night Wenda sent me a long
message saying that I must never feel bad for doing well, even if it meant
beating her. Since then we keep the jokes flowing about who is going to beat
who! We have reached a similar level now, and despite Wenda being my biggest
rival, she is also one of my biggest supporters, alongside my family and
training group.”

When the
going gets tough, Annerie also turns to her family for moral support,
specifically her two brothers, Robert and Sias, who both play Super 15 rugby
for the Cheetahs. “There are tough days where I feel like giving up, but then I
just pick up the phone and call one of my brothers, and they give me the best
advice! They always tell me, we are not the type of people that quit!” says
Annerie.

Annerie
only started athletics in grade one because it was something to pass the time
with, but by the time she was 10 years old, she was competing at SA
Championships at primary school and youth levels. “It took me a good five years
to win at the age of 15 for the first time, though,” she says. In those years
she was based in Bloemfontein and coached by DB Prinsloo, but after school the
opportunity arose to go to Tukkies to further her athletics career and study
law. However, it didn’t quite go to plan, at first…

“I never
realised how tough it would be, and in my first year in Pretoria, my athletics
went backwards. I asked my new coach, Hennie Kotzer, why the training programme
was not working for me, and he told me he had a lot of faith in his programme
and that I must just keep going. It honestly felt as if I was in a ‘hell camp.’
Also, I had no friends or family there at first, which made it more tough, and
I am very grateful to the friends I made, as they were a great help with my
studies. Juggling athletics and a law degree is no joke!”

By the
time Annerie reached her second year at varsity, Hennie’s sometimes offbeat
methods began to prove successful, and her athletics began to flourish. “My
coach is a little bit crazy!” laughs Annerie. “Some days, when the weather is
bad, he will still make us train, whether it be stair-work or running in the
rain. We usually rest on Sundays, but if the coach says we’re training, then we
don’t rest. One specific time we trained for 21 days in a row!”

But it
worked, and in the same season that she claimed the national title, Annerie was
also selected for the SA World Champs squad that went to Moscow in August, where
she says she saw a different side to the sport. “Most of those athletes run for
a living, it is their profession. Athletes in South Africa need to have a back-up
plan, as most of us won’t be able to afford to ‘just’ run. This is unfortunate
for me, as I would love to keep running until I can no longer run anymore,”
says Annerie. Nevertheless, her future goals include competing at the 2014 Commonwealth
Games in Scotland, and she has high hopes that ASA and SASCOC will sort out
their differences to make this possible. She is also aiming to get a medal at
the World Student Champs in Korea in 2015. “Then of course I would love to go
to the Olympics in 2016!”