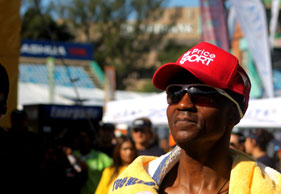 A year ago, Ludwick crossed the Comrades finish line first in
5:31:03, sparking huge celebrations in his
hometown. Then the news broke that his A sample had tested positive for
methylhexaneamine, and a while later confirmation came that his B sample was
also positive, which resulted in a huge knock to his reputation and a loss of lucrative
sponsorship deals. Now, a much-delayed
inquiry has found multiple irregularities in the testing process and cleared
Ludwick of all charges, and at the beginning of May he was finally
awarded his winner’s medal and trophy by the Comrades Marathon Association.

Now he says he now hopes for a better future
in the sport he loves. “It was a very low moment going through these
allegations,” says Ludwick. “I had to allow the law to take its course. Maybe
it was God’s will, but I knew of my innocence from the beginning. I won fairly.”
He adds that he knew he would have to fight for his name to be cleared: “I
walked a dark road, but I always felt that positive things would eventually
come.”

Cleared to
compete again, when asked if he fears being watched and doubted, Ludwick
remains positive. “People can judge. I know the truth and that I ran fairly,
doing what I love best. There is always hope after a storm and now I’m on top
of the world!” And for Ludwick, there is no better response than going into competition
harder than before.

Ludwick continues
to stand by his ‘work-hard-to-get-ahead’ philosophy and feels that the
drug-testing irregularities found in his case is a definite wake-up call for
South African athletes. “It’s an eye-opener to the procedures, and we need to
educate athletes,” he says. “And as athletes, we need to take responsibility.
We need to ask ASA what they’re doing. Some of the top athletes in this country
don’t know what’s happening when they cross that finish.” He uses a very
powerful image of a climber trying to climb Kilimanjaro without the tools to do
so, when describing the knowledge the average SA runner has: “One can be very
talented, but then one doesn’t know about the processes involved in testing,”
he says.

For an
athlete who has avoided alcohol and smoking throughout his career, the doping tests
were indeed a mountain to climb. While suspended and trying to clear his name,
the champ still turned to running to help him cope, despite the media circus over
the last few months. At home in his village in Ga-mamabolo, Polokwane,
Ludwick’s loving wife, Loreto, as well as his friends and the community all stood
by his side. “For months I could not provide for my family, so we took a knock,
but we survived,” he explains. “Running just made me happy at that point, and
it helped me get rid of my stress.”

That saw
him return to fulltime running late last year, and early in the New Year he came
back to
and joined Bedfordview Athletic Club. “They took me in as their son,” says
Ludwick. “I was lost and they accepted me, despite the dark cloud that followed
me. It gave me more strength after the criticism out there.”

Now the
champs says the 2013 Comrades is his priority, and the Big C will always be his
main focus. “The race is a privilege for any athlete, it’s the nation’s and
world’s ultimate, and something every South African should honour.” He’s eyeing
another top finish this year and has spent a few weeks in restudying the route. For now
he is remaining tight-lipped about where he wants to be in the next few years,
simply putting it this way: “I’ll always be back and grow stronger!”

Here are
just a few of the points in the inquiry findings that saw the doping charges against
Ludwick dropped:

?
There
was an absence of control over the Doping Control Station (where samples were
taken), regarding who entered it and the reasons for athletes leaving and
returning.

?
The circumstances of the sample collection process were found to be such
as “to cause some doubt to be placed on whether or not the samples that were
tested were in fact those of Mr Mamabolo.”

?
The panel found a
“remarkable lack of concern for the need to record precisely what happened or
the rationale for the documentation and information required.”

?
Mr Mamabolo was described as “a patently honest witness.” By contrast,
the credibility of three SAIDS witnesses was called into question.