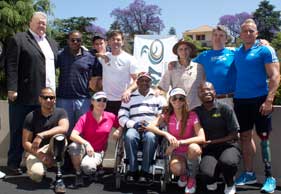 The phrase ‘can’t be done’ simply does not feature in
the vocabulary of the dynamic Lee Wyser, founder of the Guts 2 Glory
Foundation. She is a winner of numerous national and provincial titles in body
building and fitness competitions, as well as an experienced runner and
triathlete, and for years she has been raising funds for athletes who require
prosthetic limbs or wheelchairs in order to participate in endurance sports or
body building. Her current goal is taking a group of disabled athletes to the
5945m summit of Kilimanjaro, the highest mountain on the African continent –
including a wheelchair athlete!

“My
sister Kimmy is brain damaged and I guess I have always had a passion for
disabled people. In high school a friend’s mother worked at St Giles Home and
when I had the time, I would help the disabled folk swim or play basketball and
other sports,” says Lee. “Then one Saturday, I got the shock of my life when my
youngest son Taylor injured himself on his quad bike at the beach. A life guard
phoned me and said he was taking my son to hospital with a suspected broken
back. On arriving at the hospital, I saw the look on my son’s face and for his
sake, I had to remain strong. I have never prayed so hard in my life, and made
a deal with God that if my son’s life was spared, I would dedicate my life to
disabled people. Today, Taylor is a healthy, active young sportsman – I call
him my miracle son – and I am carrying through on my end of the deal.”

Not
long after Taylor’s recovery began, Lee began running with Ntsikilelo Mdladla, a single-leg amputee
from Khayelitsha Athletics Club who lost his leg in a shack fire in 2007. They met
at the Gun Run race in Cape Town, where Ntsi had done the 10km on crutches. “On
that day I promised Ntsi that I would help him get a prosthetic leg and
hopefully make the 2012 Paralympics. That was the birth of the Guts 2 Glory
Foundation. Every weekend for two years, if we weren’t running races, we were
competing in body building competitions, and two years later Ntsi had a
prosthetic and a blade sponsored by Medi-Clinic. My dream is to raise funds for
disabled athletes and underprivileged athletes and help them to make their
dreams come true! I am truly blessed to be involved with all the athletes and
sponsors of Guts 2 Glory!”

Fast
forward to 2013 and Lee came up with the idea of taking a team of eight South
African disabled athletes up Kilimanjaro in February 2014, led by SA
Paralympian and single-leg amputee Heugene Murray. “The aim of our Ampt-a-manjaro
No limits Kilimanjaro Expedition is to break the limiting
belief that a disabled team could never conquer Mount Kilimanjaro, and through
this, we want to raise funds for other disabled and underprivileged athletes,”
says Lee. “Our
goal is to make this climb an annual event and provide 1000 amputee children
with prosthetics every year through the African Leg Project.”

Also part of the expedition to Tanzania will be
American triple amputee and Ironman finisher Rajesh Durbal, who not only agreed
to come out for the expedition, but also to run the Kilimanjaro Marathon a few
days after the climb and ride the Cape Argus Pick n Pay Cycle Tour once back in
SA, and then also do a fundraising and motivational tour of South Africa to
raise awareness of disabled sport. At the time of writing, the team was not yet
sure if all the climbers would be able to go for the palnned summitting on 27
February, in which case Lee says another expedition will be arranged for later
in the year. “We did think about postponing the whole trip until September, but
Rajesh had already booked his flights, accommodation race entires and
motivational talks, so we decided to go ahead now in February, even if just
Rajesh, our team captain Heugene and I climb, along with the camera team and
support crew. Then we will arrange a second expedition in September for the
rest of the group to go, because I promised them a trip to Kili in 2014, but
after that we definitely want to try make it an annual trip in February.”

To find out more about the Guts 2 Glory Foundation,
follow the team’s progress or pledge your support for their fundraising
efforts, visit www.guts2glory.co.za.