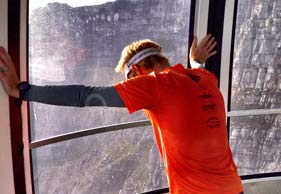 Heavy cloud cover and cool conditions set the stage
for Andre Calitz’s record attempt as he took on the famous Platteklip Gorge, aiming to climb it 12 times in one
day, more than the vertical height of the world’s highest mountain, Everest! He
cracked the first summit in just 35 minutes and 36 seconds – it takes most runners around 90 minutes – and with
seven laps completed within six-and-a-half hours, he still had more than five
hours to fit in the five remaining summits to achieve his goal, which he
triumphantly achieved within the 12-hour cut-off.

“Just the idea of having to climb up so many times
is enough to make you tired from the start, but you just put one leg in front
of the other and keep slogging. Luckily the climbs get sort of blurry after a
while!” says Andre. “The last lap was not the hardest one. Lap six was hard, as
I was only halfway, and Lap 11 was tough as I did not eat enough before the
lap, so I bonked a bit.”

There’s no specific schedule for the cable car, so
timing is more luck than planning, and for a runner aiming to set records,
chunks of time can be lost waiting for the next trip down. “I had no specific
plan with regards to the cable cars and I actually timed most of them quite
badly this year,” says Andre. “Also, last year I got very cold coming down the
mountain, so this year I had a K-Way jacket in each car.”

A second-time entrant, race day offered many
highlights for Andre. “Seeing my wife there with my dog Monty, running a lap
with him, and having family, friends and sponsors there to support me was
incredible. It’s so great seeing the blue and orange race tees when you climb
and cheer each other on. There is a real camaraderie in this race, which is
very special.” Another great element of the event is the fundraising done by
the runners, with this year’s event bringing in R450 000 for the event
beneficiary, Sinenjongo High School.