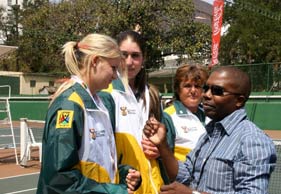 In the second
edition of Modern Athlete back in
2009, we interviewed a 16-year-old
who was already the country’s top junior tennis player, African Junior Champion,
and a player who had reached the quarter-finals of the Junior French Open.
Today, Chanel has a singles ranking of 175th in the world and
is hoping to break the top 100 by the end of this year. “It’s about getting
into the main draw at the slams and winning smaller tournaments on the way,”
Chanel explains. She is currently ranked second in the SA national singles
women rankings behind Chanel Scheepers, and at this year’s Australian Open, she
was just short of the final draw qualification, and is regularly proving her
mettle against the big guns.

“My mom was
a tennis player, so I was forced to try the sport out as a kid,” says Chanel,
“I didn’t like it at first, but grew into it, played on a provincial level at
school, and then represented at age 14.” A seasoned player at
slams as a junior and now a senior, Chanel has got used to all the travelling
and the crowds. “At first it was scary, because there were a lot of people
watching you, every point is hard-fought and you come up against girls who
train just as hard as you do, but I prepare well.” Touring all over the globe
is always a task for Chanel but her father being a pilot has its perks with
flight discounts and she has also paid her own way with prize money over the
last few seasons. With Babolet sponsoring her with racquets, grips and strings,
Chanel’s game is all taken care of.

Chanel trains
at Virgin Active Bedfordview and uses running as a base for her work on court. While
running long distances ups her endurance, a lot of her groundwork consists of
shorter 400m and 200m sprints to work on speed. “During a game you have
10-second bursts of pace where you have to be fast on the court, running from
side to side and to the baseline and net, so my running preparation helps.”

Chanel
trains for three-and-a-half hours Monday to Friday on court, seeing her coach
and trainer for an hour three times a week, and also spends some time in the
gym to work on her overall strength training. Nutrition also plays a huge role
in her lifestyle, and while she doesn’t have a specific diet, she introduces
more carbs before a tournament and specific protein foods for muscle recovery.
“With a sponsor like USN, it’s simple for me, and they’ve helped me a lot!”

Chanel’s
recent success is also due to long-time coach Earl Grainger, who has been with
her since she was 14. “He helps me mentally prepare and makes sure I stay
positive,” says Chanel. “He has helped my technical game over the years, and
even though he can’t tour with me overseas, we always communicate about my
results and opponents.”

Chanel
brings a different style of play to the game: “As a left-handed player, I have
an advantage because a lot of players don’t know how to defend against my style
of play and people say I use it to my advantage – and why not? Like my
favourite player, Rafael Nadal, I use a lot of ‘leftie’ techniques, like
slicing and the angle my serve takes.”

While
Chanel is left with little time for hobbies, she recently used painting and
drawing as a go-to whilst recovering from a hamstring injury she picked up in
March. She is fully recovered now, and travelled to in the beginning of April
to represent South African at The Fed Cup. “You have to remember to have fun
and enjoy tennis,” she says, “and you have to set clear goals within yourself
to succeed.”