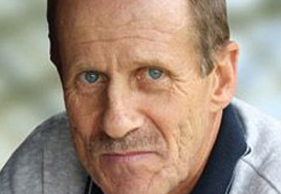 There are now six runners who have achieved the
magnificent feat of running 40 Comrades Marathons, and three more should do it
this year, including Alan Robb, revered both locally and internationally as one
of the most loved South African runners of all time. He is the leading Comrades
gold medallist with 12 golds, and known as
much for his four Comrades wins as his famous red socks to show his support for
Liverpool Football Club. Though he emphasises that he takes it one year at a
time, many believe that Alan could become the first person to achieve 50
Comrades medals.

Come Comrades day on 2 June, Alan will once again be
running in the colours of his first athletics club, Germiston Callies Harriers
(GCH). He his first Comrades in 1976 in Callies colours, having already
finished third in 1974, and went on to win the next two years as well. In 1978 he also became the first person to break the
sub-5:30 barrier, winning in 5:29:14, and he added a fourth win in 1980, as
well as a second place in 1982. Today at the age of 58 he still runs remarkable
times, finishing the Comrades last year in 8:34.

“I joined Callies in
1974 and left the club in 1992, mainly because all the guys I trained with had
stopped running. I lived in Woodmead and started running with a group of guys
from Rocky Road Runners, but I always kept in touch with Callies, attending
many of their functions and runs,” says Alan, who in recent years also participated
in the colours of the Dabulamanzi Canoe Club. “In January I decided to rejoin
the club permanently and have already run a couple of races in my new colours.
I am really looking forward to running Comrades in Callies colours, as I feel
that’s where I belong and that’s where I was taught to run.”

The change of club came
about when Andre Berrange, vice-chairman of GCH, approached Alan last year to
ask if he would run his 40th Comrades in Callies colours. Andre says
Alan may not have run in their colours since 1992, but he has always been
associated with the club, so much so that he was awarded honorary life
membership in the late 1980s. “Over the years he has remained in touch with his
contemporary Callies clubmates and was a regular attendee at all our races, as
well as our annual Comrades breakfast and other club functions.”

When Alan announced he was returning to the club, he
was welcomed with open arms by all at Callies. “We saw it as a homecoming for
one of Callies’ favourite sons. It is with great pride that we will once again
see the humble, modest running legend in the familiar blue and white colours
along the Comrades route in 2013 and beyond,” says Andre.

While Alan says this
year’s run will be a milestone in his running career, it will also be a very
sad day. “A lot of people will remember that my wife Merle passed away a week
before last year’s run, and it was only because of my daughter Staci that I
actually ran. My whole world has been turned upside down. Merle and I were
planning to do something special together after this run, but sadly that will
not happen. My motivation to run has been at an all-time low and I have done
very little running. It will be a very emotional run dedicated entirely to
Merle, who attended 35 Comrades with me and was always at the end in the finish
area as a guest of the Comrades Marathon Association. I miss her terribly.”

GCH has been planning a series of events leading up to
Alan’s 40th Comrades. “We felt it was high time that our club’s race
was dedicated to Alan, as a token of appreciation for the honour that he has
brought to the club. This year the timing was perfect to rename our race on 7
April to the Alan Robb 32km and 15km,” says Andre. Typically, Alan acknowledged
this honour in his understated way: “I feel
very honoured to have this year’s Callies race named after me.”

Furthermore, the members of GCH plan to run their own race
and Comrades in red socks to honour Alan, and encourage all other members of
the running community to do the same at both races. Another highlight in the
build-up to Alan’s 40th Comrades will be a pre-race breakfast where
all his old training mates and legends of road running will celebrate with
Alan, who says this should be a great reunion and good fun.