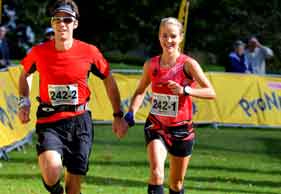 One second Landie
Greyling will be speeding along the trails, the next she will come to a sudden
stop… because she spotted a dassie! “I just love furry animals, because I often
saw dassies on our farm when I grew up, and I just light up whenever I see a dassie,
or an otter.” Little surprise then that she is affectionately known as ‘Dassie’
to her husband Christiaan and close friends. “Christiaan started it, because
besides stopping to look at dassies, he says I always look so happy running on
rocks, just like a rock-rabbit, or dassie. He even jokes that he was happy to
move down to the Cape, where there are more dassies, which makes training with
me easier… because I will never stop if he has a cramp, but just let me see a
dassie and I stop right there!”

Landie and Christiaan are quite the trail
super-couple: Both were selected for the SA team that went to the World Ultra
Trail Champs in Wales in July, where Christiaan finished first amongst the SA
men, in 32ndposition, while Landie finished ninth in the women’s
race. The previous year she went to the World Long Distance Mountain Running
Champs in Switzerland as well as the World Short Distance Mountain Running
Champs in Italy. “In 2012 I went to World Champs at very short notice and
wasn’t properly prepared, so I feel that Wales was my first real World Champs.
It was very special to finish in the top 10, but even more special to have
Christiaan there. Very few couples can do that together.”

On home soil, her list of wins and podium
finishes in the last few years includes first at the Salomon Skyrun, Old Mutual
Two Oceans Trail Run and Hobbit 100km Trail Run, and second at the 2013 Otter
Trail Run, after finishing third the two previous years. “The Otter 2013 was a
real highlight, because of how I executed my race, staying up there with one of
the best trail runners in the world, Ruby Muir. Another highlight was winning
the mixed category with Christiaan at the ProNutro AfricanX Trail Run this
year.”

Landie
(29) grew up near Pretoria, where she ran her first 10km fun run aged nine,
then competed in cross-country for her school and ran the 800m and 1500m in
athletics. Having finished school in 2001, she did not know what career path to
follow, so her parents encouraged her to go work overseas and travel while
deciding. “I went to England and worked and travelled for two years, then came
back to study in 2004 at the University of Pretoria. I had always been a
numbers person, so I enrolled for a B.Com Accounting
degree, then completed my Honours in 2007, following which I started working
for Pricewaterhousecoopers to complete my articles.”

While at university, Landie got back into
running in 2007, initially focusing on road running, but in May 2008 she
ventured off-road at an adventure racing event in the Magaliesberg, and not
only discovered a talent for trail running, but also found romance. “I was in a team with
two friends, while Christiaan was in another team. After the race, one of my
teammates knew them, so we hung out for a while, but I had to leave early, so
only spoke to him for about three minutes. A week later I saw him again at a
trail race. I actually drove the wrong way up a one-way road and suddenly there
was a bakkie in front of me, hooting and flashing its lights, so I pulled over to
let it go past. When I parked, the same bakkie pulled up next to me, so I
pretended to scratch around in my car, because I was so embarrassed, but then
there was a knock on my window and the bakkie driver was Christiaan!”

“After that trail run, he asked me out for
an ice-cream, but I was seeing somebody at the time, so I said let’s rather go
for a run, because I told him I was looking for somebody to train with. The
next day he phoned me to invite me to join his training group, but I later
found out he actually just got a bunch of friends from his ‘koshuis’ to join
him for a few early morning runs. One by one they disappeared until it was just
us two!”

After qualifying as a Chartered Accountant
at the end of 2010, Landie was seconded by Pricewaterhousecoopers to go work in
the USA for four months, where she competed in numerous trail runs, winning the
women’s category in nearly every one! Upon her return, she and Christiaan lived
in the Garden Route area for a year before moving to Stellenbosch and getting
married in early 2012. She subsequently did her Masters degree, specialising in
tax, while lecturing part-time at a college in Bellville, but recently left
that behind to join a Stellenbosch-based company as a tax consultant. Her new job
requires two hours a day in the office, which allows her enough time for
training twice a day.

“I appreciate the time I have for
training, but I am also laying the
groundwork for a career after running. I’ve got a five-year plan and want to
work full-time for this company, as they are investing in me by helping to
sponsor me. Fortunately I have several product sponsors, like Salomon for
apparel and shoes, and supplements from PeptoPro, and thanks to my part-time
work and sponsors, I don’t have to run everything to make ends meet, so while
trail running doesn’t pay that well as yet, I don’t need to turn to road
running for small pay-outs.”

Despite work commitments, Landie and
Christiaan still manage to do their early morning and weekend runs together,
and she says it is terrific to have a partner who shares her passion for
running. “Our quality time together is often spent running, which means we
don’t feel that we’re putting our training before our partner.”

When asked who is the faster runner,
Landie laughs and says he is usually five minutes ahead of her these days, but
she has beaten him in a few races. “We did a half marathon a month before our
wedding and at 5km he told me he’s going now, then at 18km I tapped him on his
shoulder and said hello. He was not pleased! But he is such a natural runner –
he works full-time, and if he could train more, I reckon a lot of the top guys
would have to watch out for him!”

Looking
ahead, Landie says she hopes to race the Mont Blanc Marathon,
Grand Raid Pyrenees and Trans-Alps events in Europe in the next two years, then
move on to the longer trail events in the USA. “I want to run the San Francisco
50-miler, which is one of the highest paid trail runs, then do the Western States
and Leadville races as well. Meanwhile, she will continue to race most of the
local events, and says she is really excited about the direction trail running
is taking in SA: “Trail running has grown
tremendously over the past couple of years, and I believe it will continue to
grow as more and more people discover the trails and how much fun it is.”