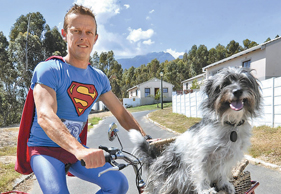 Stellenbosch
born and bred, Charl (37) rode his first Cycle Tour in 1990, but a double puncture
forced him out of the race. He was back in 1991 to complete the 105km race for
the first time, and later posted a handy fastest time of three hours 21 minutes.
However, a few years ago he decided to do things differently and ride for a
cause. “When I was young, my brother and I would cycle to the caf? on my
grandfather’s old bike when on holiday on the coast, and many years later I started
collecting them. I thought it would be cool to ride the Argus on one of the old
Post Office bikes, and to raise funds for Animal Welfare in the process.”

Then I
decided to try something still more different. I wanted a superhero outfit, and
Superman was the easiest to put together: Blue Spandex tights, red underpants,
a tight blue top, a badge and a cape – it was easiest for my mom to put
together for me,” he laughs – and he’s worn the suit ever since in the Cycle
Tour, as well as in a number of running events, all to raise funds.

Charl has
six of his own rescue dogs, so the animal welfare cause is close to home for
him. “I have that ‘My Family sticker’ on the back of my bakkie showing me and
my six dogs. I also serve on the committee of the Stellenbosch Animal Welfare branch,
so it makes sense to raise funds for them.” To date, Charl has raised R7600 following
his 2013 ride, and he’s raised about R19 000 overall in four years.

“Years ago
it was a novelty to see people dressed up and riding for charity, but now there
are many. Still, I often hear parents telling their kids, ‘Look, there goes Superman.’
I see it as awareness-raising of the animal welfare cause as much as about fundraising…
but after five tours on old bikes, I think next year I am going back to a
conventional light bike!”

To support
Charl’s cause, go to www.doit4charity.co.za/c.