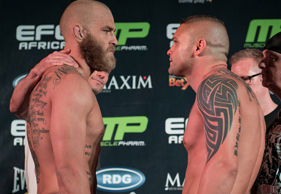 At the beginning of October, the headline bout at EFC
Africa 24 at Carnival City in Johannesburg saw Garreth ‘Soldierboy’ McLellan
regain the EFC (Extreme Fighting Championship) middleweight title from Jeremy ‘Pitbull’
Smith in an aggressive bout that went to the ground in the first round. Garreth
pinned Smith to the mat while landing a devastating elbow to the nose, and with
Smith gushing blood, Garreth applied a rear naked chokehold and forced Smith to
tap out. After months of regaining form and fitness following a double-knee
operation late last year, Soldierboy held the champ’s belt again. “My mind was in
a better place,” he says. “I knew Smith was going to be strong and quick, but I
remained positive.”

Garreth’s talent on the rugby field at school in
Durban took him to the Sharks Rugby Academy in 2007. With a focus on getting
fit for and learning the tricks of playing hooker, he started working with Sharks
fitness coach Jason Vorster, who used MMA as
part of the of the training programme. MMA is a full-on combat sport that
allows grappling and striking techniques from a range of different martial arts:
Judo, boxing, muay thai, karate, wrestling, sambo and jiu jitsu. “Jason was
impressed with what I could do, so I thought I’d look into MMA, and from there
it was just a massive snowball effect on my career,” says Gareth. “I moved up
to Jo’burg, where EFC started up, and now the sport has grown substantially!”

As an amateur, Garreth boasted an
undefeated 10-0 fighting record. He turned pro after a year of fighting, and
then joined EFC in 2009, where he went on a three-year undefeated streak before
becoming the middleweight champ in 2011. His reign was short-lived, however, as
Smith took the title away early in 2012, and Garreth was then sidelined by a
knee injury, but he worked hard to regain fitness and moved back up the
rankings to become number one contender for the title. “The preparation this
year has seen me in the best shape and more confident than before,” he says. “With
my family and church behind me, I also had the support.”

For the new champ, training consists
of four to six hours a day, six days a week, and each session includes technical
training, conditioning and strength work. Sundays are set aside for running, rowing
or cycling, where Garreth focuses on cardio – although he does sometimes take
the day off for a relaxing round of golf. “I have to prioritise running,
because it helps me maintain my weight. As a middleweight competitor, I have to
sit on 84kg, so the sessions keep me lean,” he says. “Running is also good to
wind down after tough conditioning work, and you can clear the head for a bit!”
Garreth also concentrates on rest and recovery, which involves stretching,
pilates and swimming. “We push our bodies to the max, so it’s also about rest
and eating well – high protein, lots of veg, and the right vitamins.”

Looking ahead, Garreth aims to hold
on to the title he worked so hard to regain, and he hopes to get his big break
on the international stage. “I’ve learnt from experience and I’ve adapted as a
fighter,” he says. “I believe that I’m supposed to be doing this.”