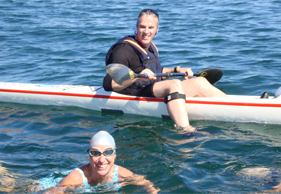 When Vanessa Haywood is not busy with a
modelling photo-shoot or an audition for a TV or film role, chances are you’ll
find her hitting the trails, but her lifestyle demands that she often goes
straight from mountain biking and trail running ‘tough girl’ to the glitz and
glamour of modelling and acting quickly, so she has learnt how to keep her hair
in good shape.

“I
have really long fair hair and the combination of sun, sweat, elastic bands,
helmets and caps wreaks havoc on my hair! It gets knotty and ends up looking
like an old Barbie doll’s nylon hair after a race – and I also colour my hair,
so the bleach dries it out severely. Fortunately, I use the most fantastic
products that fix all of the damage in an instant,” says Vanessa. She swears by
NAK Aromas Shampoo and Conditioner, which also have leave-in treatment to add
to their range. “It detangles and literally stops split ends in their tracks,”
says Vanessa.

Due to having
fair, sensitive hair, Vanessa has found that spray-on sunblocks made by Paul
Mitchell and Redken are great for her hair care regime. “Just make sure when
buying a sunblock hair treatment, that it contains both UVA and UVB protectors
in it.” Vanessa also tries to avoid washing her hair daily, as the natural oils
in the hair get washed away. “One has to wash one’s hair after a race, but
during the week, when training, try to stick to three times a week, especially
if you have long hair,” she advises.

Despite
the fact that swimming is a great way to get fit, with minimal impact on your
muscles and joints, the effect on your hair is not quite so ‘injury-free,’ says
Nadia Bachini, who has been a
competitive swimmer for more than ten years, including competing at the World
Champs (in Italy) and doing the Robben Island to Big Big open sea swim in Cape
Town. She says that all the hours spent in the pool take a toll on one’s hair,
and she should know, given that she does up to 8km in the pool most some
training days.

“As a
swimmer, the key to ensuring your hair stays healthy is to wash it after every
swim with a shampoo that does not contain sodium,” says Nadia. “In addition to
this, a mask is recommended at least once a week, to replace all the lost
nutrients. These can be bought from a local pharmacy, and you don’t need the
most expensive brand on the market.”

Nadia says
she has also recently started supplementing with Prosana Hair and Nail booster,
which is formulated with vitamins to assist in hair care. “Vigro is also
something I have recently started using, as this brand has a tonic which can be
applied to the hair immediately after a swim, left in and then the hair can be
styled normally,” says Nadia. She also claims that she will leave her hair to
‘air dry’ as much as possible and minimises using a straightener to once in
three weeks.