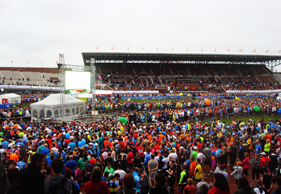 The hotel we stayed in was abuzz with road runners who
had travelled far and wide to run one of the fastest courses in the world. The
days preceding the event were filled with exploring the stunning city, nights
aboard boats on canals and walks through the Red Light District.

Race day was chilly but there was an air of excitement
on the Metro ride from Amsterdam Zuid to the Olympic Stadium, which was host to
the 1928 Olympic Games. On arrival, loads of the portaloos were still locked,
but thankfully there were some on the grounds – if you know me, you’ll know
that I have to go to the loo three or four times before a race, due to nerves.

While waiting for the start, I met some interesting
people from Leiden in Holland, as well as Kazakhstan and Scotland, but only saw
two or three South African shirts among the 13 000 runners. If the woman next
to me hadn’t told me, I wouldn’t have known that the gun had gone off for the
start. Around nine minutes later, I finally crossed the start line. In New
York, with its 44 000 people last year, I got across the start line in about two
minutes!

We started through the stunning Vondelpark and through
some of Amsterdam’s streets and beautiful canals. My Garmin told me I was
running at a 6:05min/km pace, a little too fast for what I anticipated but I
felt strong! I kept thinking of what my dad had said a week earlier: “If you
feel you’re going too fast, or that you can go faster, don’t!” At the 12km
mark, we entered the area along the Amstel River, which I was really looking
forward to, as I’d seen stunning pictures online with beautiful windmills that
epitomise Holland. While beautiful, we had to contend with a very strong
south-westerly wind, which, at one point was so strong that I had to run with
both hands on my bib for fear of it flying away!

The river section was out-and-back along each bank, so
it was a little disheartening seeing hundreds of runners across the river passing
23km when I was at 14km. It was at this point that I put my iPod on, and it
never left my ears until the final finish line. There were few spectators and
little entertainment along the route, so I had to dig deep, despite the flat
course. I came through the half marathon mark in 2:10, one of my fastest ever
half marathon times, and at 26km I met up with my mom, who replenished my
resources and gave me a little moral support. We had to endure the next 7km
through an industrial area with little spectators along the route, and then at
35km, the 4:30 bus was hot on my heels, so I found Lil’ Wayne’s Knockout on my playlist and picked up
the pace.

WHAT A SMALL WORLD

At 39km, the strangest thing happened! A fellow runner
tapped me on the shoulder and pointed to a spectator who’d been trying to get
my attention. The spectator happened to be my former Marketing Manager who was
in Amsterdam on business – he literally walked out of his hotel and saw me
running by. This chance meeting really gave me a push for the last 3km, and when
I saw the sign that said “Last 1km”, I pushed still harder, thinking of New
York’s last mile through Central Park, about my husband, my mom in the stands
and generally just about how badly I wanted this race to be over. My official
net time was 4:31:55 but I’m counting 56 seconds off for my stop to bring me to
4:30:59. My legs were not as tired as I’d expected, but I think they were
secretly longing for a hill along the course to relieve some of the muscles that
I had been using over and over again on the flat course.

The race was very well organised, but the course was
boring, mainly due to the fact that I felt that Amsterdam’s people did not get
involved! Hearing one person yell your name, or scream “Go South Africa” goes
such a long way. It’s the smallest gesture, but makes such a difference!