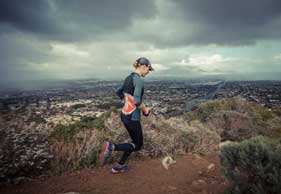 It’s
amazing how trail running has developed over the last couple of years and each
of the four Spur Cape Winter Trail Series races was quickly sold out via online
entries. All four of the runs in this series were different and special in
their own way. The first race at Paul Cluver, my favourite, had its endless
climb, followed by magical single track and gulley crossing with ropes – I
always wonder how those with less lengthy legs manage to descend through the
rocks here!

Race
two was all about taming the ‘Tyger’ at Tygerberg Nature Reserve. Not many flat
parts, but at least every climb had an awesome downhill. It was not a very
technical route, but it was quite slippery in places, and some of us gained a
few war wounds. This year’s new start worked well, except that our hearts were
jumping out of our chests within the first five minutes with that 1.5km near-vertical
climb!

The
third race at the Taal Monument in Paarl was a fast and non-technical route,
with amazing views. Having raced the previous day, I wasn’t perhaps as speedy
as I should have been, and I think my legs were quite glad that it wasn’t
technical. It’s much easier to get into a rhythm on a course like this and I
was able to enjoy the scenery without having to concentrate on the footing
underneath. With the dry weather preceding the race weekend, the route was much
less slippery than last year.

At
the time of writing it is a few days to go to race four, the finale in Kleinmond,
which looks set to be an awesome morning of racing, although the weather
forecast isn’t looking too favourable. I’ve decided to tackle the longer XL
again this year, and I’m especially looking forward to the section over the
rocks in the first loop and the single-track down the mountain.