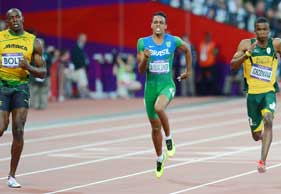 The SA team headed to Russia with several athletes considered
medal contenders, such as Lehann Fourie in the men’s 110m hurdles, Khotso
Mokoena in the men’s long jump and Sunette Viljoen in the women’s javelin,
amongst others. While Lehann unfortunately had to withdraw due to injury, the
SA team still had six athletes qualifying for their finals after preliminary
qualifying rounds, with another seven athletes automatically appearing in final
rounds. That saw Victor Hogan end fifth in the men’s discus, Sunette claim sixth
in the javelin, and Khotso finish seventh in the long jump, while Willem
Coertzen set a new SA and African record in the men’s decathlon as he took
ninth position, and Elroy Gelant was 12th in the men’s 5000m. But it
was Johan Cronje and sprinter Anaso Jobodwana that stole the show.

In the men’s 1500m final, Johan looked to have gotten
his race tactics wrong, as he was tightly boxed in for much of the race. With
just 250m to go and the pack winding up the pace, the SA record holder was
still down in eighth position and looking out of contention, but then things
opened up for him at just the right time and he surged up the inside lane to
claim a podium position in 3:36.83, the first ever by a South African in the
1500m at the World Champs. “I believed in myself, but I wouldn’t have
put money on myself,” says Johan. “I had a terrible tactical race – I couldn’t
go fast as everyone was on my right, and it was only the last 60 metres I had
to go past, as that’s when it opened up on the inside.”

In the sprints, Jamaican Usain Bolt further cemented
his status as the greatest of all time, but all of SA’s eyes were on Anaso
Jobodwana in the 200m final. In July he won the 100/200 ‘double’ at the World
Student Games in Russia, and after making the semi-final round in the World
Champs 100m, he then clocked 20.14 in the 200m final to finish sixth, improving
on his eighth position the 2012 London Olympics. “I was happy about how I ran in Moscow – I didn’t
lag this time, like I did in London – but when I got to the straight I tried to
kick and I started to tire up,” says Anaso. “The up is that I ran three
consistent races of a high standard and I made it to the final, but I didn’t
run a personal best and I didn’t medal. That disappointment will help me going
into next season, and I’m going to be ready for next season!”

Over the past five years, South Africa’s performance
at World Champs and Olympics has fluctuated somewhat. With the team having
returned from the 2007 World Champs in Osaka, Japan with no medals, an
immediate improvement came at the 2008 Beijing Olympics thanks to a silver
medal won by Khotso Mokoena in the long jump. Then at the 2009 World Champs in
Berlin, Mbulaeni Mulaudzi and Caster Semenya both won gold in the 800m races, while
Khotso claimed another long jump silver. In 2011 the twin highlights of the
World Champs in Daegu, South Korea were the silver medals won by Caster in the
800m and the men’s 4x400m relay team, while LJ Van Zyl took
bronze in the men’s 400m hurdles and Sunette Viljoen also won bronze in the
women’s javelin.

Then
at the 2012 London Games, Caster’s silver in the women’s 800m was undoubtedly
the highlight of the Games, while Sunette narrowly missed a medal with fourth
in the javelin and Khotso once again made the long jump final, but a big
talking point was youngsters Anaso Jobodwana making the final of the 200m, Lehann
Fourie running in the final of the 110m hurdles, and Marc Mundell setting an
African Record in the men’s 50km walk. Meanwhile, Willem Coertzen finished a
solid ninth in the decathlon. Thus South Africa went to Moscow hoping to build
on the success of London, and while a single bronze medal may look like a poor
return, the number of athletes in finals is still something to brag about!

Race
walker Marc Mundell was in action in the 50km walk in Moscow, hoping to build
on his terrific SA record performance in the London Olympics, and he was
ecstatic about finishing 31st in 3:57:55. “This was my first 50km race since London, my second-best ever time, and
one position better than London, so I am delighted. The conditions in Moscow
were challenging – the weather was all over the place, with rain, sunshine and
humidity – so I think I paced myself really well and I was on PB pace until
35km.”

“I made a tactical call at 36km to chase my PB, but
I think I underestimated the conditions and overestimated my conditioning. I
made it to 40km and then the wheels fell off. I struggled through until 45km
and gradually picked myself up for the final 5km, where I caught several
positions. I think that my recovery from surgery has gone well, but the five months
of training that I lost affected my conditioning and the base just wasn’t there
in the final 10km, which was my strength in London.”