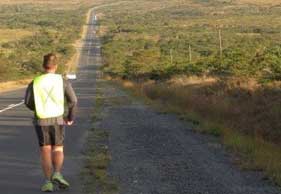 Running
an ultra-marathon is already a big undertaking for the average athlete, but
running an ultra twice in a row, back-to-back without stopping, is a whole
different ballgame. And yet, it has been done at the Old Mutual Two Oceans
Marathon (56km), at Comrades (89km) and even as the 160km Tuffer Puffer in the
Puffer 80km trail run on the . But up until
this year nobody had ever tried it at the Washie 100 Miler between Port Alfred
and , one of the toughest events on
the SA race calendar.

Incredibly,
three runners took on the Double Washie 320km challenge, and while Eric Wright
and Tobie Reyneke didn’t quite make it all the way through their ‘second lap,’
Hazel Moller did make it home to rewrite the history books. While Eric was forced
to bail 44km into the second leg, Tobie made it all the way to 293km – just
27km short of his goal – when he decided to call it a day. Although
disappointed, he was still pleased to have raised R36 000 in sponsorship for
Stop Rhino Poaching, a charitable organisation that sponsors tracker dogs for
anti-poaching units in game reserves.

“I
have always been concerned with the issue of rhino poaching, and so far they
have deployed 22 rhino dogs across SA,” explains Tobie. “Some people say ‘Oh,
but the dinosaurs died out eventually, so why do you care about the rhinos?’ I
say we should protect all the beauty around us. Today it’s rhinos; next year we
could do something different. Starting with charity, however small, can make a
difference.”

Tobie
got into running five years ago when he entered the Lantern Race 5km in with his wife
Elaine. The running bug had bitten and he progressed up through the distances, until
later, flipping through Tom Cottrell’s Nedbank
Runner’s Guide to Races in South Africa, the Washie caught his eye.
However, his first attempt in 2011 didn’t quite go to plan: Tobie got lost in
the opening 14km loop around Port Alfred and eventually came home last to be
awarded the infamous Washie Tortoise Trophy.

Feeling
a bit disillusioned, he was convinced to come back and try run Washie ‘the
right way’ by Eric Wright, a seasoned Washie specialist with 24 consecutive
Washie finishes, but in 2012 Tobie’s plans once again went off course. “I had
an operation on my eye about six weeks before Comrades and I walked Comrades
still recovering from my op.” With his vision limited to a “mostly yellow
blur,” Tobie only just finished Comrades in 11:58:29 and didn’t even consider
doing Washie, which was just eight weeks later. However, in the months that
followed, his biggest wish was to go back to Washie, and this time he wanted to
do it with a double challenge.

With
Elaine and his fairly newbie seconding team of Morne Nel, Jacques Vlaming,
Jacques Burger and Gerhard and Hettie Fourie in tow, Tobie says the first 160km
went smoothly enough, but the second lap proved much more challenging as the
team struggled with the heat and running out of patience. “My seconds were exhausted
after the first leg, so here and there we had 15-minute naps – but I slept with
the car keys in case my wife had any idea of leaving!” Then with about 45km to
go, Tobie says his wife put her foot down. “I got my first ultimatum from Elaine,
who needed to catch a plane back to work on Monday morning. I was to be on that
plane or face her wrath!”

And
so, with the pace getting ever slower, Tobie decided to call it a day with 27km
to go. “I could’ve gone on for my ego, but I didn’t want to risk it. I was
grumpy, but figured there’s always next year,” he explains. “More training will
be in order, as well as more sleep in the weeks before, but for now the fundraising
will continue and we’ll see what we’re capable of in 2014. Washie is all about
going beyond your limits. Plus, Eric and I will have to kick Hazel’s butt this
time!”

To
support Tobie’s running, contact him on 083 968 5088, or go to www.stoprhinopoaching.com
to find out more about the anti-poaching organisation and what you can do to
get involved.