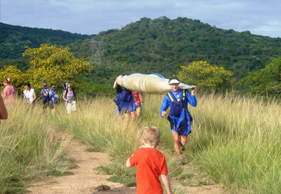 Robyn Kime
can look back on quite some 2012! Not only did she win her third consecutive Unlimited
Dusi Canoe Marathon title (one solo K1 win sandwiched between two K2 wins with
Abbey Ulanski), but also claimed the under-23 title at the SA Flat Water
Marathon Champs, then went to the World Marathon Champs in Rome and finished
second in the under-23 category, as well as fourth in the senior doubles with
Michelle Eray. She also won the Drak race for the first time, after finishing
second the previous three years, and was second in both the Berg and Fish
races.

Then in
November she decided to take on the Salomon Skyrun 100km trail race with
boyfriend Mike, having done the 40km off-road Mweni Marathon earlier in the
year. “Mike entered in 2011, but got injured a month before the race. When he
entered again, I decided to run it with him. I had been to Rome in September,
paddled the Fish River Marathon at the beginning of October, so I was fit and
had been doing a lot of running, but during the race it was very windy and we
both got what they call ‘milky corner’ in one eye. We couldn’t see properly, so
the medics told us to pull out at 65km. I felt I could have pushed through, if
not for that, so I want to do it again.”

Robyn (23) was grew up in Pietermaritzburg, where her
father worked in forestry and her mother gave swimming lessons. The family was
always active, going on mountain bike rides and hikes, and Robyn did various
sports at high school, including hockey, waterpolo and cross-country, as well
as canoeing. “The school would take a bus down to the Fish River race, so that’s
how I got started, and I went on to win a few races as a junior. I love being
on rivers – the rapids are exciting and the places we paddle through are
beautiful.”

She is
currently halfway through her Masters degree in civil engineering at the
University of Stellenbosch, and she lives near the Jonkershoek Nature Reserve
just outside the town, where she does all of her running training. “The
entrance to the reserve is 3km from our door and there are few better places to
do trail running – it would be wrong to live there and not take advantage of
that.”

Running is
an important part of canoeing, since most races include portages where the
paddlers have to carry their boats around obstructions in the river or
dangerous sections. “With my paddling background, I find that if I run all
year, I can focus on that in training and then just do peak paddling training
for three weeks before big races. I’m stronger on the portages thanks to my
running background, but I still need to train running with a boat, so I carry
my boat on every second run I do up in the nature reserve – and yes, I do get
some funny looks.”

When it
comes to picking a favourite race, Robyn admits to a bit of hometown bias. “The
Dusi is special for me because it’s a big thing in Pietermaritzburg and has an
amazing atmosphere. I also really enjoy the extra dynamic that the long
portages introduce.” The first day’s 45km stage includes roughly 15km of
portaging, with shorter portaging sections on days two (45km) and three (35km).
“Growing up in Pietermaritzburg, you have the Comrades, Dusi and Midmar Mile,
and it is definitely possible for all people to do them if they put in the
training. All three are so aspirational.”