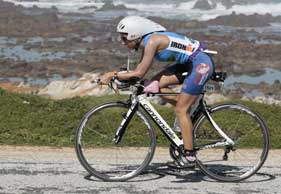 On the 12th
of October, Nicole Driver of Pretoria will line up for her biggest triathlon
event yet, the Ironman World Champs in Kona, Hawaii. Only a select few athletes
from all around the world qualify for this event through their local Ironman,
and Nicole secured her entry earlier this year when she finished second in the
women’s age category 25-29 at Ironman SA in Nelson Mandela Bay, clocking a time
of 10:58:11.

Unsurprisingly,
she describes this podium finish as the highlight of her triathlon career thus
far, and now she is aiming for a top 10 finish in her age category in Kona, but
regardless of results, she says she will just be thankful to be participating. “My
best friend was involved in a terrible accident last year in October and broke
her neck, which unfortunately resulted in her being left a quadriplegic. The
accident really made me realise how blessed I am, and that you should live
every day to its fullest. I think of her during each and every training session
and race,” says Nicole.

Nicole has
a demanding full-time job as a brand manager for Bosch, Siemens and Gaggenau,
which does make training for the Ironman harder, but she says the people around
her make it possible. “My work colleagues are really great supporters, as most
of them are athletes, so we all have a common interest and understand the
dedication needed to be a successful athlete,” she says. “You need to sacrifice
a lot of time and accept that it takes a lot of hard work.”

This
dedication sees her up every morning of the week at 4:45am for a bike session,
and at the end of a working day she either has a swimming or running session – and
she makes sure she is bed no later than 9pm. “I get to bed early and follow a
very healthy diet and lifestyle,” says Nicole. “The hardest part about
triathlon is the training and time, especially training for Ironman distances.
It is tough on your body and mind, but at the end of the day, I do the sport
because I love it. I know when I cross the finish line in Kona, all the
training, dedication and sacrifice will be worth it.”

Nicole’s
sporting career started early, at the age of three, when she took part in horse
riding and went on to represent South Africa in show jumping in her junior
years. The competitive bug had bitten deep and she competed in most sports
offered at her school, including athletics, hockey, netball, swimming, biathlon
and triathlon (as part of a team). However, it was only in 2010 that she took on
her first individual triathlon, over the sprint distance, and she took 15th
position in the women’s race. Not bad at all for her first effort.

Since
then, Nicole has enjoyed brilliant results. After winning her age category at
the Bela Bela 5150 in 2011, she had a great year in 2012, finishing third in
her category at the 11Global Tri at Sun City and fifth at Ironman 70.3, then
being selected to represent South Africa at the ITU World Champs in Spain and
coming home sixth in her category. This year she started off with a fifth place
in her category at Ironman 70.3, but what topped it all was getting that second
place at the full Ironman. Now her sights are firmly set on that top 10 in
Kona.