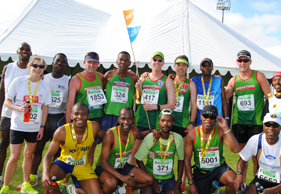 Taking
line honours this year was Elroy Gelant, who cruised the last stretch as he grabbed
victory in 1:06:00, 14 seconds ahead of defending champion, Desmond Mokgobu, whose clubmate Lucky Mohale was third over
the line. While Desmond was relatively happy with his performance on the day, he
admitted to not being in quite the same shape as the previous year: “The course
is a great one, but I was not fit enough this time around. I took the lead at
18km, but it was very challenging and I fell back to second.”

In the women’s race, a strong
performance by the Nedbank club saw athletes in green claim three of the top
four spots, led home by Irvette Van Zyl to claim her
fifth Dis-Chem title in a time of 1:17:47. She was followed home by Charne Rademeyer of Bonitas (1:18:16), with third and
fourth going to Nedbank’s Christine Kalmer and Nolene Conrad. “I
am happy about my win and form so early in the season, but must admit that I
was pushed very hard by Charne!” said Irvette.

Modern Athlete was at
the finish line to ask some of the runners how their Dis-Chem run went. Here’s
what they had to say.

Chris Kubeka (1:58): “I led the sub-2:00 bus today and
it went well! The course was fine and the crowd on the bus was full of energy.
After Christmas, people have to work hard on this route and near the end we had
to pick it up!”

Simagele Jeaneth (1:50): “I started a little
late but got back into my rhythm. It’s my first Dis-Chem race and I really
enjoyed it – very well organised and it brings a lot of people together.”

Duduzile Zulu (1:52): “I started really well
and it is a fantastic route with lots of ups and downs to test you out. It’s my
first Dis-Chem race and I loved it! It’s definitely an event I’ll come back to
next year.”

Saleman Mohomed (2:10): “I have run this race 10
times and I keep coming back because it’s one of the country’s best half
marathons! I had to work hard throughout, but it was enjoyable!”

Kate Martin (2:10): “It’s my first half marathon ever! I
didn’t train as hard as I should have and it was really tough, but it is a
great course and the water points did so well.”

Kim Savage (2:12): “There was a mix on the course –
ups, downs and flats with a huge climb near the end. I mixed it up with running
and walking and I will definitely come back next time around.”

Elias Maaroganye (1:27): “It was not my best
performance, but I loved the route – it had different obstacles. There are no
issues with the organisation and atmosphere, it’s a great day.”

Isaac Ramoroka (1:22): “I got my half marathon
PB today, so I am very happy! There are a lot of great runners here and the
atmosphere is very friendly, too.”

Sibusiso Mathe (1:46): This is my first Dis-Chem
race and the water points were amazing. I enjoy myself when I run and this is
the biggest race in January – I really liked it!”