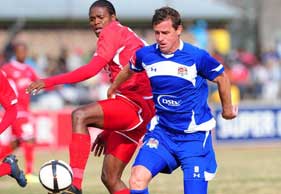 Glen Salmon admits he didn’t feel like doing any
running whatsoever when he hung up his boots last year. “After 16 years on the
soccer field, I felt I had pushed my body far enough, but my body craves work –
and I wanted to shed those kilo’s that were coming on. So now I do 5km three to
four mornings of the week, and I enjoy my runs as a bit of alone time, just me
and the road, time to reflect, time to plot the way further.”

Nowadays the former pro is enjoying a slightly ‘slower’
life in Johannesburg with wife Rosalynd and their kids, Jaime (11) and Keagan
(8), but he is still involved in the game. “I want to bring my international
experience to bear on youth players, so would ideally like to be an assistant
coach at a senior level, with some management duties in the mix, while also
working with juniors.”

Glen (35) grew up in Durban before moving to Gauteng
and then turning pro with Supersport United at the end of 1996. He played there
until 1999, when he was signed by NAC Breda in Holland. “I was playing for the
SA under-23 side in a tournament in Toulon, France where I was scouted and
asked to go on trial at a club in Holland. Playing for the under-23s always
opens doors, but I was disappointed to be dropped just before the Sydney 2000
Olympic Games. I was one of the few guys in that team who had made the jump
overseas, so it was frustrating to be left out.”

On the up side, in February 2000 Glen was called up to
the national team for the first time and made his debut against Algeria. For
the next nine years he was often in the Bafana squad, but sadly only got onto
the field three times in total, remaining an unused sub much of the time. In
the meantime, he enjoyed a successful career in Europe, playing for NAC Breda and
FC Groningen in Holland, then PAOK in Greece before returning to Supersport in
2008 and playing there until his retirement. In all, he played 332 top level
club matches and scored 85 goals.

As with any professional sport, Glen says it takes
commitment to be a successful pro footballer. “When I was a youngster I just played
as a hobby, but once I made the move overseas I really had to watch my
lifestyle, even though I had always watched what I ate and didn’t go out
partying. The nice thing about being a pro is that you can get away with eating
a bit of rubbish, because you’re training so hard, but you still have to look
after yourself. Also, I was lucky to be married and my kids were young, so pro
life suited me, whereas being single may have seen me being dragged into other
things.”

Of course, his job included a fair amount of running, although
he says soccer training has changed a bit. “It used to be a lot more ‘old
school,’ with heavy running sessions in the forest in pre-season. Now players
rather do more intense short running. Also, footballers enjoy playing with the
ball, so they’re not the happiest people when told to put on takkies and hit
the road! These days I feel a bit differently about running, though.”