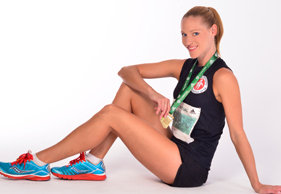 By
the time I was old enough to read and write, I could explain the complexities
of the disease Muscular Dystrophy. I also understood that it meant my mother’s
life was likely to be short-lived. But this single mother of two small children
pushed herself beyond her supposed limits in order to challenge this ‘death
sentence,’ and continues to do so. This is where my strength comes from… from
the little body that has continued to deteriorate, and the mind within it that
is determined never to give up.

My
brother and I grew up with the awareness that there were more people out there
struggling like we were, and I knew I wanted to help in some way. When I became
a fashion model, I thought I could help by using this as a platform to raise
awareness for MD. I spent years travelling the globe, posing for magazines such
as Vogue, doing campaigns such as
L’Oreal, and walking the runway with the biggest models of my time, and I still
model today, but it has not been the platform that I had hoped it would be. It
wasn’t until I decided to move to South Africa that it became clear what I
needed to do… and that is run.

Running
has been a part of my life since I was a little girl, racing through the forests
of the Canadian Rocky Mountains. I excelled in cross-country, as well as 800m to
3000m on the track, but running became a physical struggle after I developed asthma
and I was advised not to continue. However, being as determined as I am, I
continued to run all through high school. Then at 17 I broke my neck in a car
accident. The doctors feared I may never walk again, but thankfully, after
weeks in traction and a successful operation, I miraculously healed in a matter
of months. Needless to say, I took this as a sign that my legs were meant for
something.

Upon
moving to South Africa, I realised that I could make a difference through my
love of running, so I contacted the Muscular Dystrophy Foundation of South
Africa (MDFSA) to discuss my ideas about fundraising and creating awareness.
The Foundation brought me on board, and for the cause I have run half and full
marathons, as well as the Two Oceans ultra-marathon. I also ran the Jonkershoek
Mountain Challenge, the Fisherman’s Trail Challenge and other trail events, finishing
in the top four for women each time. At each event, I wear my MDSAF top proudly,
hopefully inspiring others to also help change people’s lives for the better.

I
want to continue using my love of running to challenge my body to move its
muscles the way that those with Muscular Dystrophy can’t. Meanwhile, my Mom remains the beautiful, bright, funny,
compassionate woman she has always been, and continues to amaze everyone – even
herself, I think – with her capacity to re-invent her life with each loss of
movement or ability. She has always been, and will always be, my mentor, my constant
source of love and support, and my deepest
inspiration.

To join Lindsay in
supporting the Muscular Dystrophy Foundation of South Africa, go to www.mdsa.org.za.