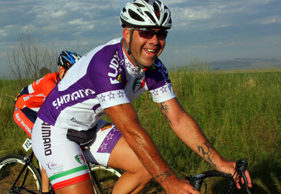 After being hit during an action cricket game for
Eastern Gauteng in 2008, Graham went to the doctor when the swelling persisted
and found out that he had stage three testicular cancer. “They had to remove
the tumour, I had to go through intensive chemotherapy, and then for recovery I
started to become more active, by cycling and running,” he says. Even when
Graham’s white blood cell count was as low as 0.01%, he continued pedalling, having
decided that there was nothing big enough that could get the better of him.
“Cycling became a body makeover for me – I was feeling better and I was not
going to feel sorry for myself and just sit at home.”

Having left home at 18 and been on his own since then,
Graham says he has always relied on himself, and after being diagnosed with
cancer, he knew that it was up to him to live positively to overcome it – and
that started with an active lifestyle. “People may say you can’t do it, but if
you are sure that this is all you want to do, then you don’t have to prove them
wrong, you have to prove yourself right!”

GET UP AND GO

Today Graham cycles a round-trip of 35km each day to St.
Benedict’s Catholic School for Boys, where he coaches sport, while weekends are
dedicated to long 120km cycles as well as 5km runs. In recent months he has
also added some swimming training to his programme as he began his journey to Ironman.
“I wanted a new challenge, and though 17 hours or so on your body is hard, I
know I can do it!” And then there is the multi-day mountain-biking Cape Epic to
come as well… but though he admits that he’s a bit scared of the huge challenges
ahead, he knows he’ll get used to the disciplines and distances when he picks
up the training.

As part of this build-up, towards the end of 2012
Graham completed a few BSG sprint triathlons to get used to the sport, and rode
the Momentum 94.7 in a stellar 2:49 as well as 24-hour mountain bike races in
the Omni-Motion MTB and Rietvlei 24-hour events. He will use Ironman 70.3 in
January as a stepping stone to the full Ironman a few months later. Also, in
2010 he rode from Johannesburg to Cape Town on his bike in seven days and now
he is planning to ride the route down to Cape Town and back (3 800km) in 18
days after his Ironman experience. And he hopes to do all of this while raising
awareness and funds for CHOC and CANSA South Africa.

“Finishing Ironman and the Epic, and other challenges,
is not only my dream, but also a platform where I can raise awareness of cancer
and inspire those around me. I’m living proof that one can do anything!” says Grahams.
“I feel that if you can conquer your mind, you can conquer anything you attempt
to do. I hope people see me and are motivated to also do something.”

At school, Graham motivates his pupils every day with
his never-say-die attitude. “When the boys heard about Ironman, they said, ‘Are
you crazy, coach?’ But I just tell them to never give up!” He says he treats
his students like they were his own children and is a coach that likes to get
involved. “The boys look up to you. At school, the coaches and teachers are the
parents and you need to push the boys to reach their potential. So when I’m
training, my chest is obviously affected and I think about stopping, but I
remember to push the thought of quitting away, because this is what I tell the
boys to do.”

Graham’s coaching skills also kick in at bike races,
and he gets very emotional about helping fellow riders at races because he just
wants to show people that they can do anything they want to, even if their mind
is telling them they can’t. “I remember seeing a lady in one race who was
struggling to cycle, and after 5km she was ready to quit – and I hate to see
people quit – so I rode alongside her all the way to the finish,” he explains.
“I helped her on the climbs and she told me I was her hero.”

And when he himself feels like he’s hit a wall, a word
tattooed on his fingers keeps him going: Livestrong. “I remember when they said
Lance Armstrong was found out for taking EPO to win his titles,” says Graham.
“I just told people I use OPE to race: Other People’s Energy!”

So, while Graham has had to come to grips with living
with cancer, he also lives with his girlfriend, his bike, and his spirit to
keep living life to the full. He reckons he is on the right track to reach his
goals of finishing Ironman and the Epic in 2013, and has a sponsorship from
32GI to help him get there, but it is obviously his great attitude that plays
the most important role in keeping him on track to do so. “I just never back
down from a challenge,” he says, “I race for no-one but myself, and I aim to be
better than I was before.”

To get behind Graham’s cause, follow his progress or
sponsor his active journey, e-mail graham.prinsloo@yahoo.com or call 0734454342. You can also
find Graham on Twitter @grahamprinsloo.