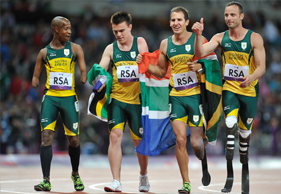 South Africa’s Paralympic athletes did
the nation proud in London 2012, securing 29 medals, consisting of eight gold
medals, 12 silver and nine bronze, and finishing 17th on the medals
table. Of these, four gold, seven silver and six bronze medals came from the
track and field athletes, who really cemented SA’s position as one of the
leading Paralympic athletic powerhouses. The rest of the country’s medals came
in the pool, with Natalie Du Toit leading the charge with three gold and one
silver, while Ernst van Dyk also claimed silver in the men’s H4 hand-cycling
road race.

One of the highlights of the Games was
the men’s 4x100m relay gold, where the South African quartet of Samkelo Radebe, Zivan Smith, Arnu Fourie and Oscar Pistorius raced to a
new world record of 41.78 seconds. They led from start to finish to lead the
Brazilian and American teams home, but the latter two teams were both
subsequently disqualified to see China and Germany promoted to the podium.
After the race, Samkelo said, “My job was to make sure I got to Zivan first and
I smacked him very, very hard to get him going for the second leg!” Zivan added
that “I just went on my gut instinct and started running early and then I heard
the loud ‘YES’ behind me and there he was.” Arnu was next up: “I was so hyped
up I just wanted to go. Then I saw the Americans stumble or have some problem
next to me and I just went. When I handed over to Oscar, I saw we had a four to
five-metre gap and knew we had it. I think I must have run a full 200m
following Oscar to the line.”

Having already become the first
Paralympic athlete to compete in the able-bodied Olympics a few weeks prior, Oscar
rounded off a remarkable season with the relay gold plus gold in the T44 400m
and silver in the T44 200m. He was also fourth in the T44 100m. The 400m was
the final event on the programme allowed Oscar to sign off in winning style. “It
was a blessing for me that I could finish off the whole summer here in London
2012 with the last race in this stadium. I wanted to give the crowd my best, and
I could actually hear them coming into the home straight. Usually I’m so
focussed and in my zone, but I could hear them and it was the most amazing
feeling that I could possibly have.”

Another golden moment came in the
men’s T37 100m final when Fanie van der Merwe dived across the line to ensure his
gold medal and also set a new world record of 11.51, having already improved
the record to 11.52 in his qualifying heat. He finished tied on time with
China’s Yongin Liang, but the finishline photo showed the South African’s chest
narrowly cross the line first. “I knew a normal dip wasn’t going to do it so I
thought I’d give it a dive,” said Fanie. “I cut my hands, elbows and knees in the
dive, but I would do it again if necessary.”

The
country’s fourth track gold came in the women’s F13 long jump, where Ilse Hayes won the
competition with a leap of 5.70 metres to defend the title she won in Beijing
four years ago, despite a heavily bandaged left thigh . She also won silver in
the F13 100m. “I tore it while we were in Germany at the end of July and it
hurt more during the long jump because that’s my jumping leg, so I’m very happy
with my results because my preparation could have been better.”

Two debutants who announced their
arrival at the Paralympics in style were Anrune Liebenberg and Dyan Buis.
Anrune took silver in the women’s T46 400m and bronze in the T46 200m, while Dyan
claimed silver in both the men’s T38 100m and 200m, then added bronze in
the T37-38 long jump, with a world record jump for his class. Both are now
looking forward to Rio 2016 and adding to their medal tally.