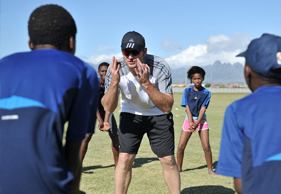 One of the most fearsome sights in world sport is a
fired up ‘quickie’ running in to bowl the first few deliveries of a
high-pressure cricket test match, putting everything he has into sending that
red missile screaming towards the opening batsman. And pretty much nobody wants
to be that opening batsman – it’s a job that few people can handle, either in
terms of cricketing ability or temperament, but one player who thrives on this
pressure is Graeme Smith, and he says physical fitness is another key element
in an opener’s arsenal, especially when you’re batting second and only have 10
minutes between running off the field and coming back out to start the innings…

“If you’ve been out in the field for 80 overs and need
to bat the last eight overs of the day, and the opposition is fresh and running
in at 150 kays an hour, you need to be able to move. If you’re stiff and tired
and sore, your body is not going to react at the speed it needs to, and without
fitness, you can’t bat for six or seven hours. Also, people often underestimate
that cricket is a summer sport and played in some of the hottest conditions
around the world, so we need a high level of fitness.”

SEND IN A RUNNER

For this reason, the Proteas cricketers do a lot of
running in training. Graeme says their long runs are up to 10 or 12km, but most
of the running is high explosive intervals, sprints and shuttles. “The unique
thing about cricket is that you stand for a period of time and then you need to
be able to move quickly, so it’s about building up the strength and endurance
in your legs, plus having that explosive power.” The players then complement
the running with cross-training, which Graeme says is all the more important as
he gets older. “With the amount of cricket we play these days, you have to
manage the impact on your body and joints. I’ve had a few surgeries, so
managing the impact on my joints is crucial. Therefore I spend a bit of time in
the pool and a lot of time on the bike, and do core and stability work.”

According to Graeme, running outside of cricket is
becoming increasingly popular amongst the country’s top players. “There’s quite
a big group of runners in the squad, plus our physio Brandon Jackson has done
24 Comrades, coach Gary Kirsten just did Two Oceans, and now that Mark Boucher has
had his unfortunate injury, I think he’s looking to run the Two Oceans, so
there’s a bit of a bug being created. I’ve started to enjoy running more,
especially here in Cape Town where we’re blessed with great trail running. I
also like running with Mark and a group of our mates, because it’s a great way
to exercise and spend a bit of time with them while clearing your head and
de-stressing.”

Having already run a few half marathons, Graeme adds
that he is thinking about joining a running club and doing more races in the
future, along with his Irish musician wife Morgan, who recently gave birth to
their daughter Cadence. “Morgan is actually a good runner, but road running is
a new experience for her, having all this sunshine here!” he laughs. “I’m quite
keen for us to get involved in a running club and go running together. My
parents have run two Comrades each and my Mom has done the Two Oceans five
times, so maybe it’s in my genes… but I’ll need some convincing to do the long
ones at the end of my career.”

To help Graeme celebrate his 100th test, his apparel
sponsor, adidas, took him to the Khayelitsha Cricket Club in Cape Town in mid-October
for a special coaching session with 100 young cricketers selected from local
schools, who then all received brand new cricket boots as part of the adidas ‘Refresh
Your Gear’ campaign. After the session, Graeme wished the youngsters luck with
their cricketing careers, and told them that they can get to the top of the
sport and enjoy a long career if they constantly work hard at all aspects of
their game. “I’m 31 now and still hopefully have a few good years left in me,
which is why I work so hard to stay fit. I really want to be part of the team
and create something special, and we still have a long way to getting there. As
long as I keep enjoying it, the body’s good, the mind’s fresh, and the family’s
happy, then I will carry on.”

Don’t miss the adidas ‘Refresh your Gear’ competition
on page 4 – you could win a new pair of adidas running shoes!